Man, it was hot. A waterfall gushed from my forehead and the slightest incline had my lungs trawling for air. If this had been a movie I’d have stopped, put my hand on my hips and nodded, realisation dawning as I looked at a flashback bubble above my head showing sweat-drenched, weary walkers staggering past the beach bar where we sat in the shade sipping chestnut beer the previous day.

An eleven kilometre coastal walk with hardly any undulations to speak off. It was a stroll in the park surely? 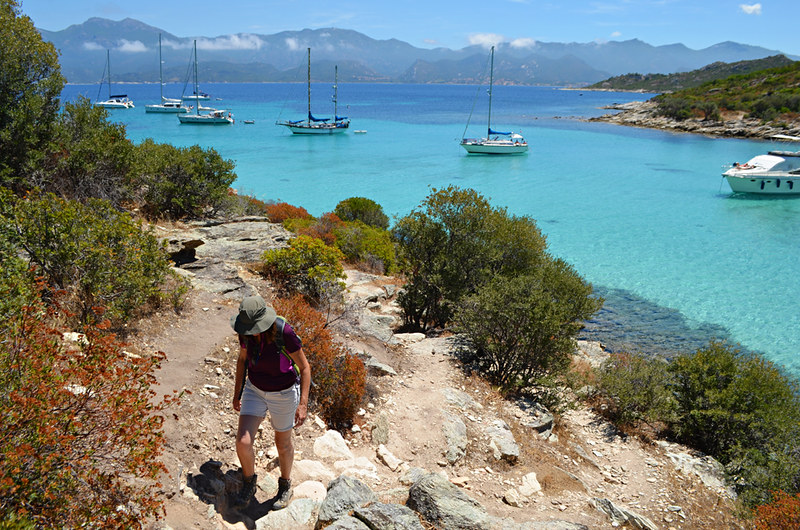 Two ingredients turned that idea on its head; searing 30C heat combined with no shade.

The distraction from the march or die conditions was the coastal path from Lotu Beach back to Saint Florent fell into the ‘stop every few hundred yards and exclaim WOW’ category of coastal walks. What we’d seen of Corsica to this point had already convinced us it was more than deserving of the L’Île de Beauté name given to it by the French. 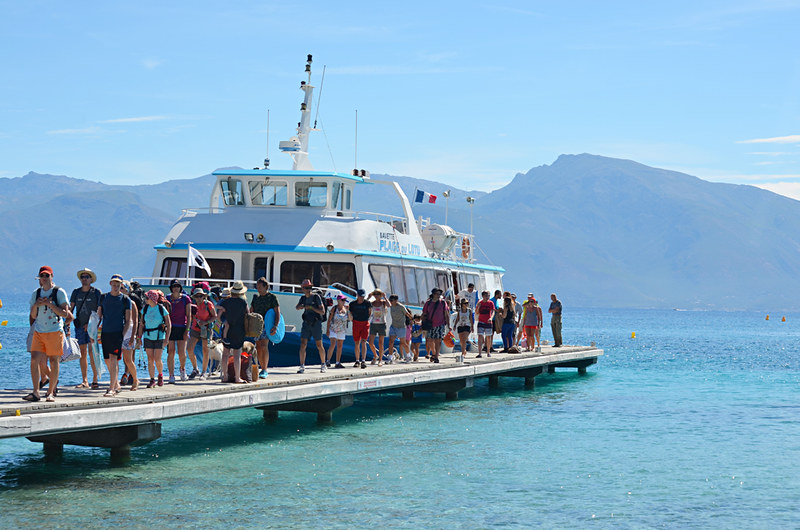 The boat which dropped us at Lotu Beach was packed to the gunwales (appropriately in this case) with typical beach seekers – French/Corsican families laden down with umbrellas, bags bulging with baguettes, towers of towels and with children and dogs in tow. It was a pleasant voyage with interesting moments – you don’t expect to get buzzed by a flying Zodiac. But where most routes start with us escaping the crowds this one was more like going on an excursion with half of Saint Florent.

That feeling dissipated in the breeze almost as soon as we alighted at Lotu Beach. Whilst we got our bearings, everyone else was swallowed by dunes and the low scrub surrounding the beach. They were clearly people with plans which didn’t include Lotu itself as the long crescent of white sand was crowd free, even though it was exactly the sort of beach you dream of escaping to on a cold, dreary day. 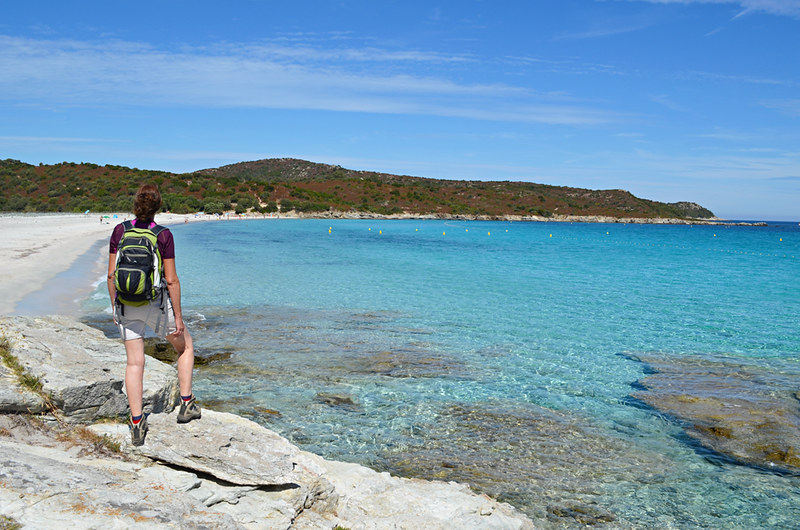 You have to allow me one ‘lapped by crystal clear turquoise water’ or I’ll never have the words to describe what the sparkling scenery along the coast was truly like.

We were so hooked by the scene we had to sit for a few minutes simply to acclimatise to the extreme beauty. If that sounds overly gushy, go stand on the edge of Lotu and then tell me I’m overselling it.

From Lotu we left everyone behind, our route crossing rocks and sandy paths through low bushes, occasionally unlocking the unmistakeable aroma from curry plants, known more romantically as l’immortelle d’Italie in Corsica. Every couple of hundred yards we’d wind around a corner to be faced with another tiny, sandy cove. Idyllic is another no-no word in travel writing but guess what pops into the mind when you stand on a rock looking down at pure, white sand and water with the clarity of tinted glass? 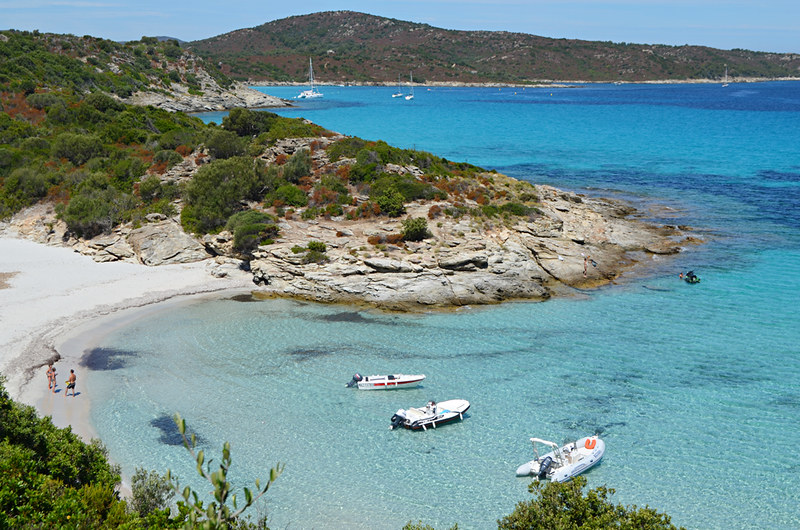 Some coves were virginal, in others the water was broken by a handful of dinghies or a couple of small yachts. I was envious of bronzed people who could step from their floating beds into a refreshing natural bath like those calm waters.

By this point it still felt like a sun-kissed saunter. A lone rock jutting out into the sea offered slightly more of a challenge. Rock steps dissecting it gave it the appearance of a sacrificial altar. We had to investigate. 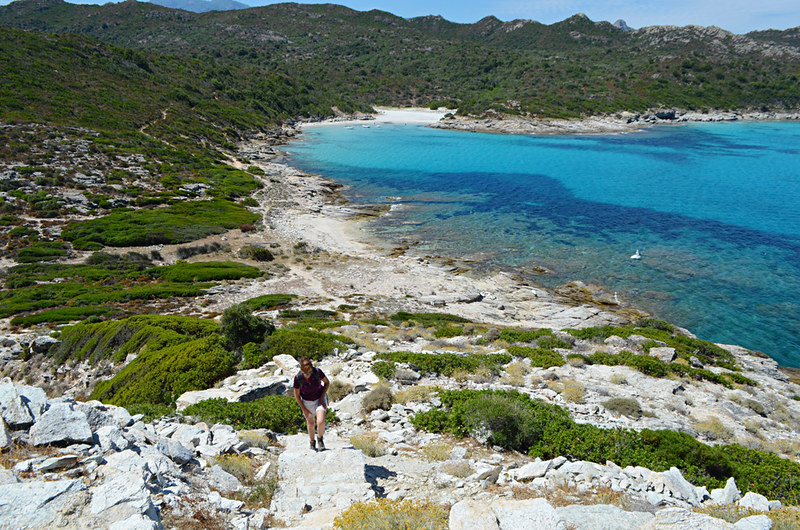 At one time there had been a Mortella tower on top, it was a natural lookout point. The tower had long gone, but the 360 degree views allowed us the opportunity to absorb in one slow spin just how stunning the north Corsican coast is. However, the short but steep climb kick-started the waterfall under my hat.

A couple of hundred metres more and there were more man-made additions to the coast. First a relatively modern semaphore above a small lighthouse, and then a Mortella tower which was actually still standing, at least half of it was. The story goes these robust, rotund Genoese defences so impressed Nelson, he had similar ones built around Britain’s coast. 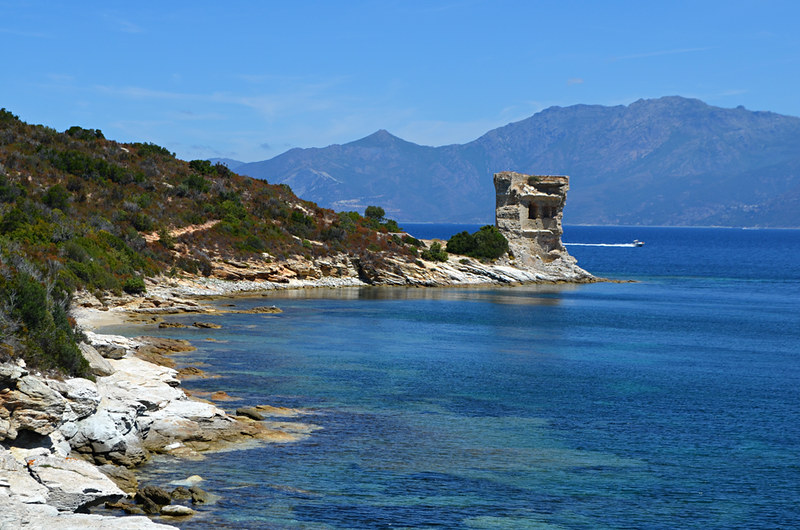 At some stage the sun had swapped kissing our faces for blasting us with furnace heat. The lack of shade was taking its toll. Subsequent picturesque bays still warranted a pause in order to make suitable noises of appreciation. But the pauses became noticeably shorter as we ploughed onwards to our goal.

A descent on a soft path through scrub led to a barrier we’ve rarely encountered on walking trails – a wide estuary between us and the rest of the route. The estuary itself wasn’t a surprise, its width was. We sat on a rock at the water’s edge, removed our boots and scanned the transparent water. We knew it was shallow enough to easily cross in parts, the trick was knowing which parts these were. A woman sunbathing on the opposite bank drew a helpful curve with her hand to outline a route which would keeps the parts we wanted to stay dry out of the water’s reach. 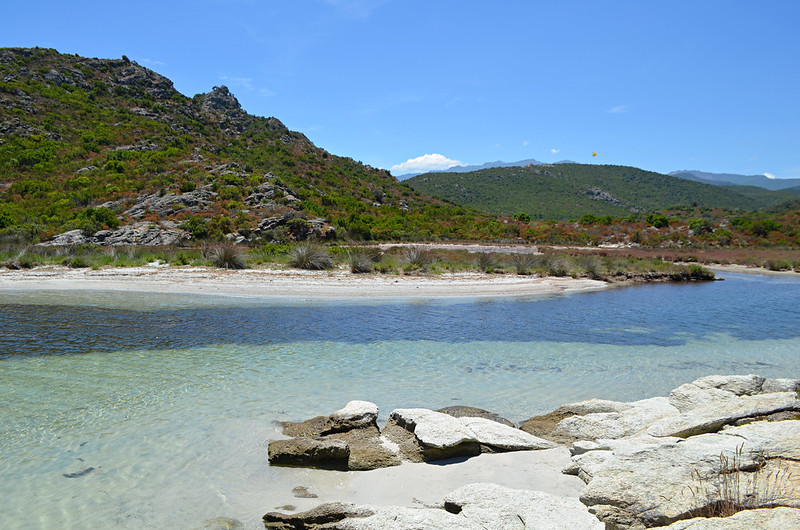 The first touch of the only-just-cool Mediterranean was positively orgasmic, a feeling which intensified as it crept up our legs, passing calves, knees and teasingly touching lower thighs.

The woman’s advice was sound. The water stopped its advance just below short level and we emerged on the opposite bank with dry clothing. 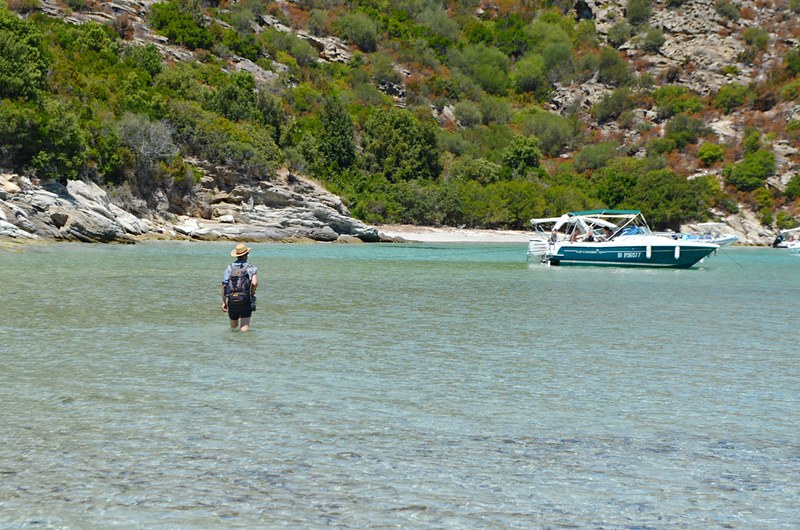 It was the most invigorating element of any walk I can remember. Feet and legs felt as though they’d just enjoyed an expensive spa treatment, the result of which left the whole body feeling totally refreshed and raring to go. We were more than ready to tackle the final few kilometres to the beach bar where a couple of ice cool chestnut beers with our names on them waited patiently for our arrival.