You’ve got to love the Medio Ambiente (Dept of Environment) on Gran Canaria. Just over a year after we’d helped put together what was an absolutely cracker of a walking route across Gran Canaria with Inntravel, they erected a lot of new signposts with different names.

Actually, I should thank them because it meant we had to return to the island to walk the whole route all over again. As it’s such an enjoyable route, it was no hardship. 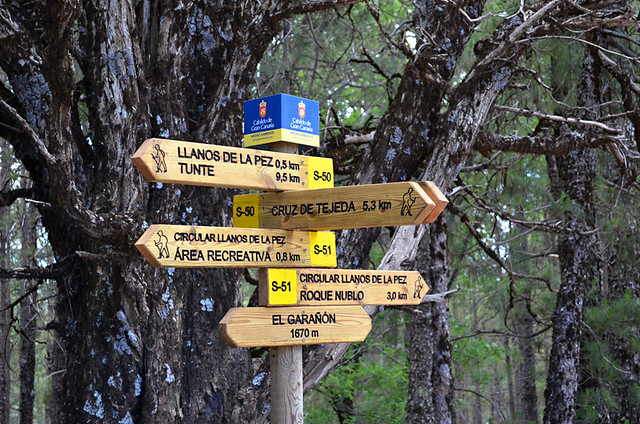 Part of the problem you can find with walking routes on the Canary Islands is when new signposts are erected, they’re often not in the same place as the posts they’re replacing. That’s confusing enough. A second issue is often the names are changed as well. Anyone who knows the Canary Islands well will know that some places are known by more than one name.

San Bartolome de Tirajana is also known as Tunte – the name which, this year, is the preferred one for signposts in the area.

After a bleary-eyed, early morning flight, longish taxi ride and breakfast in the Hotel Tirajanas, we were on the trail not much after 10am. 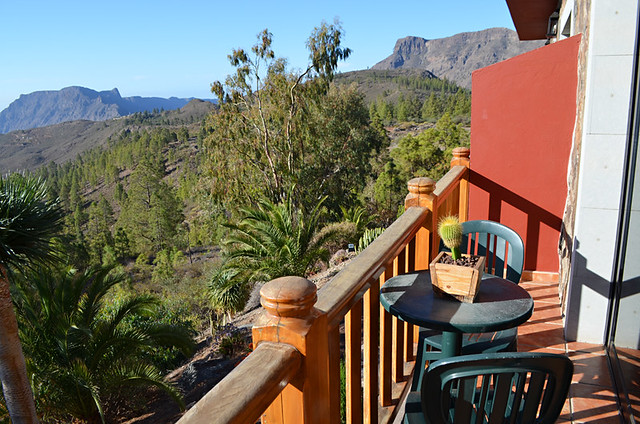 I’d almost forgotten how beautiful the area around Tunte is with its dramatic valley wall, pine trees and whitewashed villages nestling on slopes. The views in Gran Canaria are simply ‘bigger’ than on most of the other Canary Islands; there’s no monumentous volcano to dominate as there is on Tenerife.
Fifteen kilometres later, the cobwebs were all blown away and we were back into full on hiking mode.

The first time we walked the route we were pulling together directions, which often means walking a lot further than the finished product. This time, following our own directions felt like a stroll in the park, albeit a very big park. 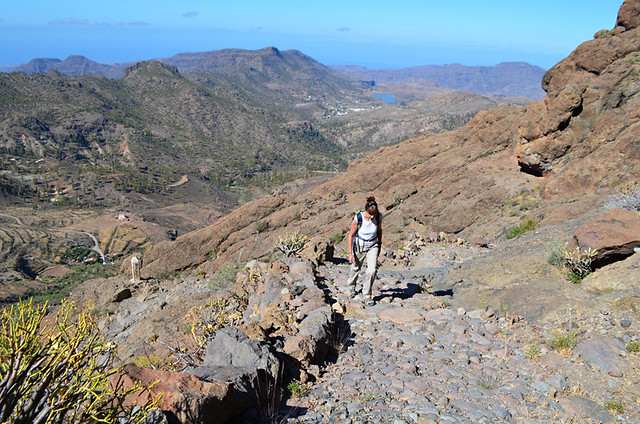 The climb out of Tunte is one of my favourite parts of the route, the vistas opening up to include the man-made lake at Chira behind us whereas the path ahead lay hidden by the steep cliffs. As we climbed, disturbing the local sheep, we pondered whether people would find the path vertiginous or not; always a difficult call as levels of vertigo vary so wildly.

Last time out, Tunte’s sunshine stayed in the valley and we were shrouded by low cloud almost from the point we reached the plateau that makes walking on Gran Canaria’s ‘rooftop’ relatively easy. This time the clouds stayed away, leaving us with perfect walking weather and a surprisingly early sighting of Roque Nublo. The funny thing about walking on circular islands like Gran Canaria and La Gomera is that once you get to the heights, places seem a lot closer than if you were trying to reach them by road. As well as the views we were wowed by nesting woodpeckers who’d riddled a telephone pole with their nests. Arrival into Tejeda always puts a smile on our faces thanks to the vocal welcome from the frogs who inhabit the stream below the town. 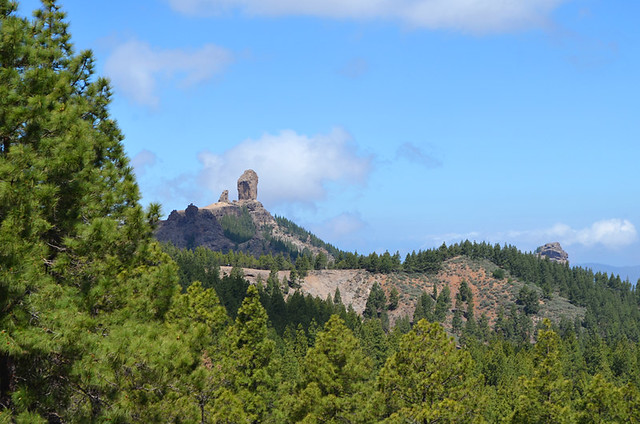 The weather stayed on our side the following day as we made our way through wild flowers and lost world landscapes to climb to Roque Nublo where a couple of surprises awaits first time visitors. One is the landscape up there, the other is that it can busy with daytrippers whose coaches get them close enough to stroll to the rock. The fact some of these daytrippers were wearing flip flops was a give-away they hadn’t walked the same 11km we had. Our path with excursionists overlapped only briefly as our route quickly took us back to the path less travelled. I’m always a bit miffed when places like this are easy to get to for folk who don’t put in the effort, but that’s just me. It’s a stunner of a spot however you get there. 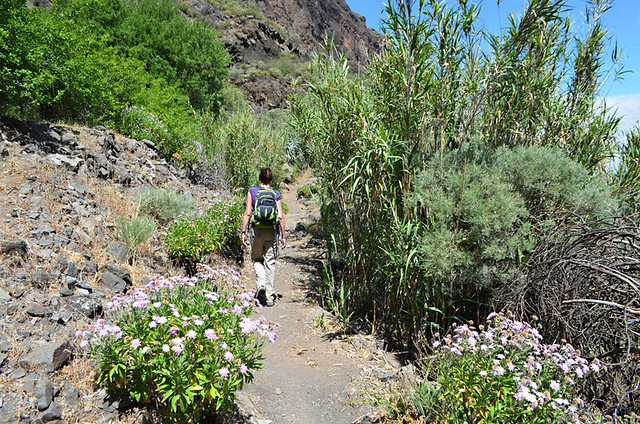 Twenty four hours later we were back to trails where we hardly saw another soul as we made our way north, swapping the dramatic canyons and peaks around Tejeda for softer pine forests, eucalyptus groves and then rolling farmlands with a patchwork quilt of green and barley coloured fields. This constant shape-changing is one of the things that makes walking on Gran Canaria so special (I’m not going to mention the overused tag that often gets attached to the island). 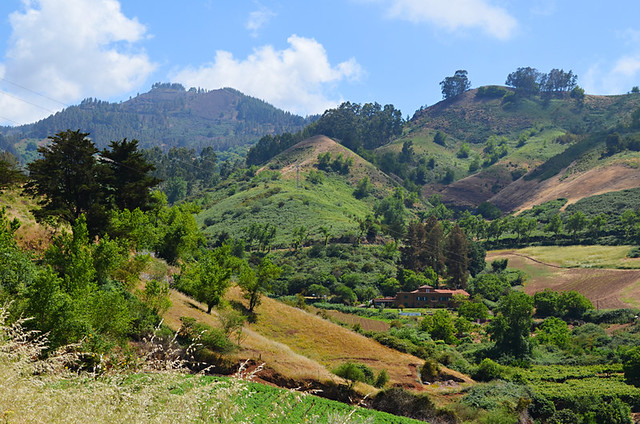 It’s scenery which lures you into a false sense of security; easy walking and a little treat which ends with snoozing in comfort to the sound of cowbells and not a lot else. A new dawn brings spectacular changes as the countryside morphs from gentle farmlands into a subtropical wilderness in the space of a couple of kilometres at a ravine which plunges through dense cane thickets and swaying grasses obscuring the path. It’s pure Indiana Jones territory and not a trail for anyone with vertigo. There was no Hada to accompany us on our descent on this occasion as our little canine friend had sadly gone missing whilst on another adventure a few months earlier. We like to think she had simply found new owners. 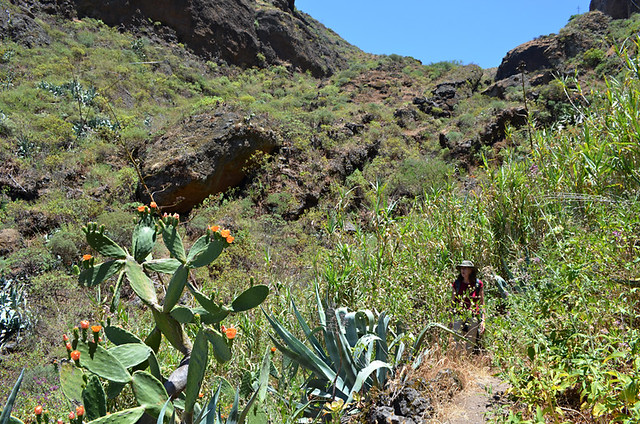 Our penultimate leg took us through the lovely, lush and very, very hot Agaete Valley to the red house, Las Longueras. It’s a hotel we’ve become very familiar with over the last few years.

We had one more route to fit in before, the only new section on our journey. In theory it should have been easy, but road closures due to a rally added an unexpected element. Still, these are the sort of challenges route finding throws at you. 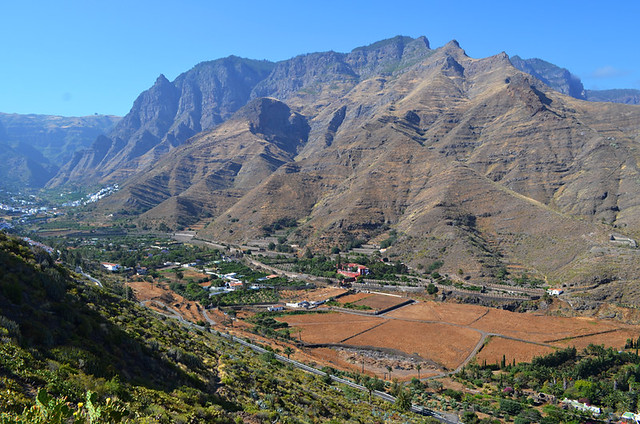 Despite the new signposts and changes of names, the directions we’d written previously held up exceptionally well. It’s always a good test to go back and follow your own directions after a wee break, just to get a similar experience to those who will be using them.

For us, following directions for a change, instead of putting routes together, made everything remarkably easy. In fact it was like being on a walking holiday rather than working on one. But don’t let our frinds at Inntravel know that.