Whilst I’m certainly not bored by palaces I tend to think of them as aloof, empty mausoleums; monuments to privilege. Yes, they can be pompously good looking and works of architectural brilliance but they can leave me a bit cold. They’re beautiful, but I don’t always relate to them.

So the palatial paradise that is Sintra wasn’t high on my ‘want to do’ list when we visited Lisbon. 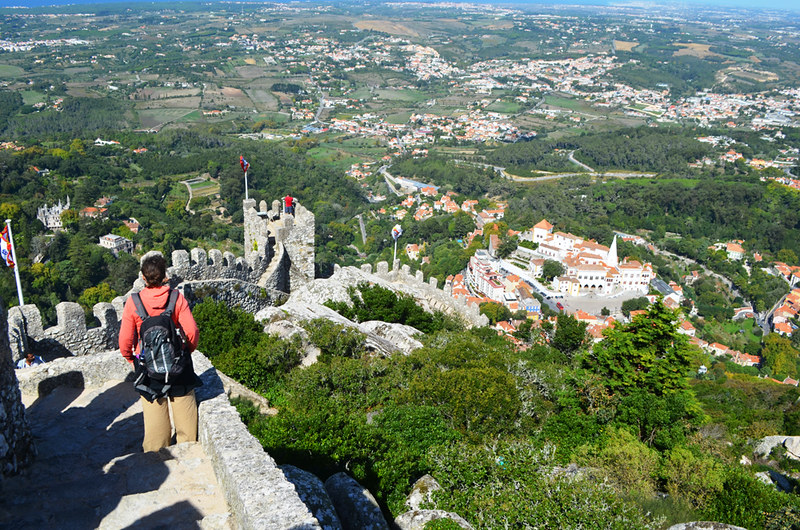 Sintra was the place where the Visigoths built fortresses and the Moors started a trend of building flamboyant palaces. The lands where Portuguese aristocracy came for a bit of pampered R&R in surroundings where the scenery was nearly as sumptuous as the palaces they built.

After the kings and queens came the poets and writers, inspired by this fairytale-like aristocratic wonderland which is said to have been named after the Greek goddess of the moon, Cynthia. Lord Byron was so enraptured he likened Sintra to Eden.

If warriors, kings and romantic poets all rave about a place, it’s got to be worth a visit. 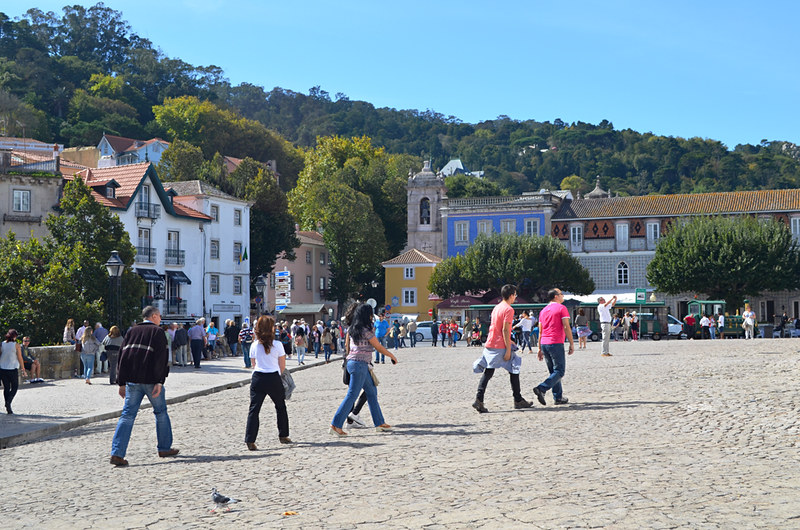 Arriving in Sintra
There can be an element of feeling as though you’re on an excursion as you follow everyone else from the train station to Sintra’s palatial centre, a 15 to 20 minute walk away. However, we soon became oblivious of the crowd as the scenery and Sintra’s human built attractions started to impose themselves. The palaces have clearly provided inspiration for many buildings where keeping up with the Portuguese version of the Joneses meant building something that if it were a man, would be classed as a dandy. 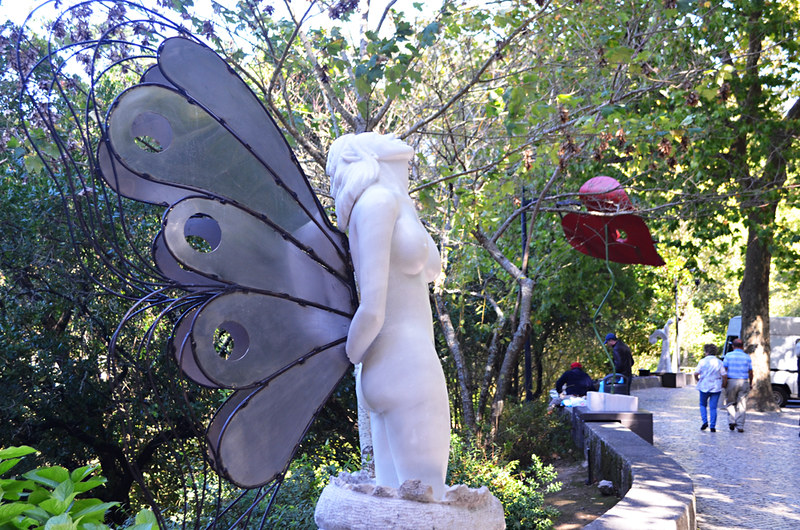 It’s quite a surreal introduction. The route is lined with sculptures, both classical and abstract – the influence of the age of the artists. Sitting quietly, and ignored, by the side of the road is a Moorish fountain.

Outdoing them all, right in the centre of Sintra, is the National Palace, a 14th century Moorish marvel whose twin, snow-white chimneys set it apart from every other Moorish palace we’ve seen. 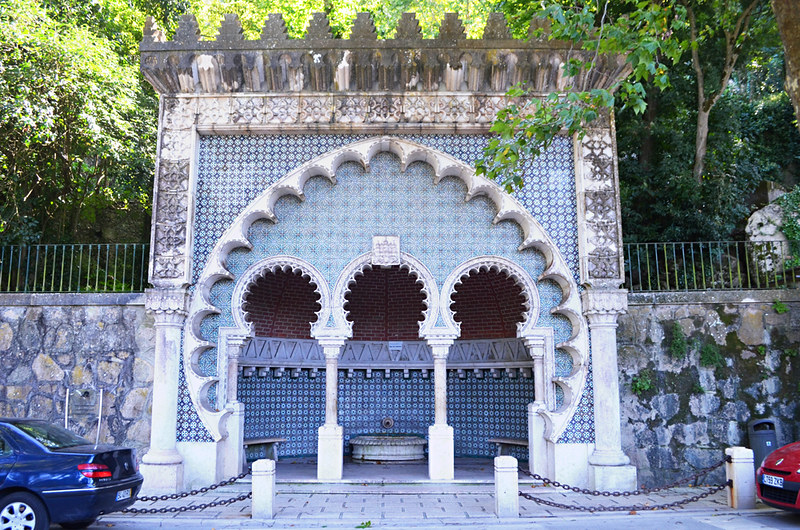 Exploring Sintra
The National Palace seems the obvious place and we join the queue to get in. However, we quickly realise that a day isn’t going to be enough to experience all that Sintra has to offer. Despite the lure of the biggest collection of Mudejar glazed tiles (azulejos) in the world we leave the queue and make our way through the town’s pretty streets. Sintra would still be pleasing to the eye without the grand palaces breaking up the forested landscape. 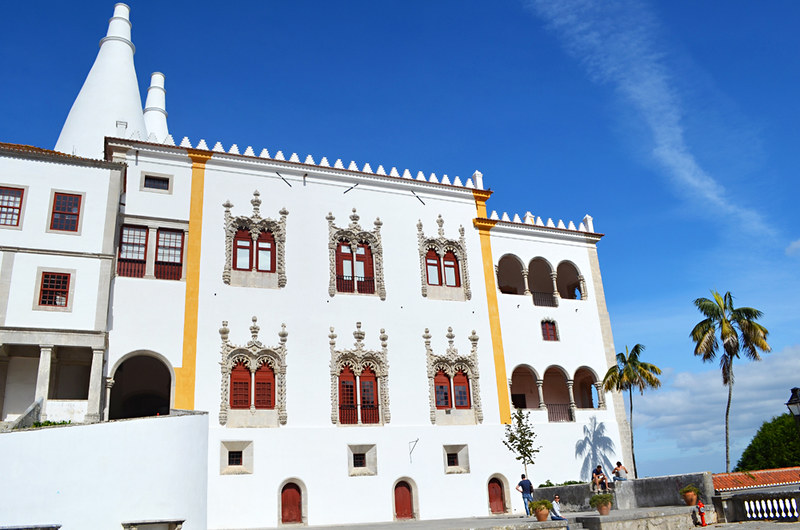 As we climb, the crowds thin and before too long we have the path to ourselves as it winds up through oak, pine and chestnut trees. Like a lot of popular tourist attractions throughout the world, many people don’t stray far from where their transport drops them. 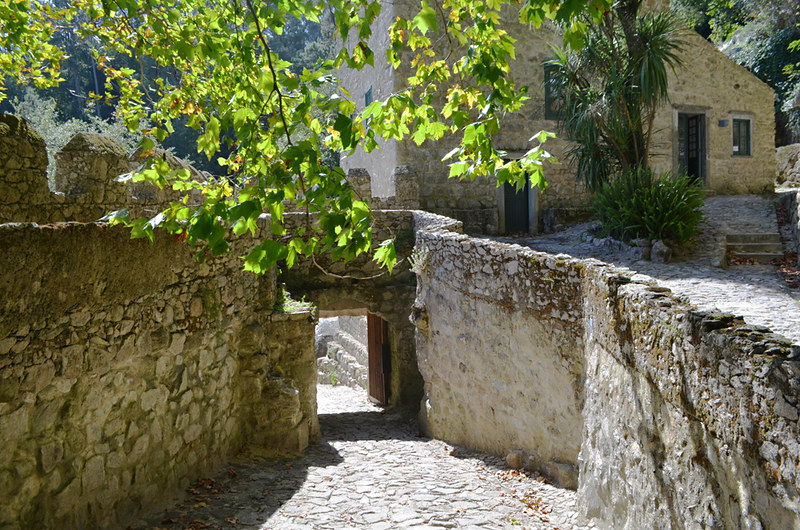 It seems incredible, given the crowds that are disgorged from every train, that the ancient Moorish Castle which dominates the hill above Sintra is a haven of tranquillity. It doesn’t have the foppish intricate designs of the palaces dotted around the landscape at its feet, but it does have old school drama. How it’s been overlooked as a Game of Thrones location is a mystery. It’s also huge, sprawling across the hillside like a European version of the great wall of China. It takes a long time to explore battlements which have views that look as though they could stretch to the end of the world. 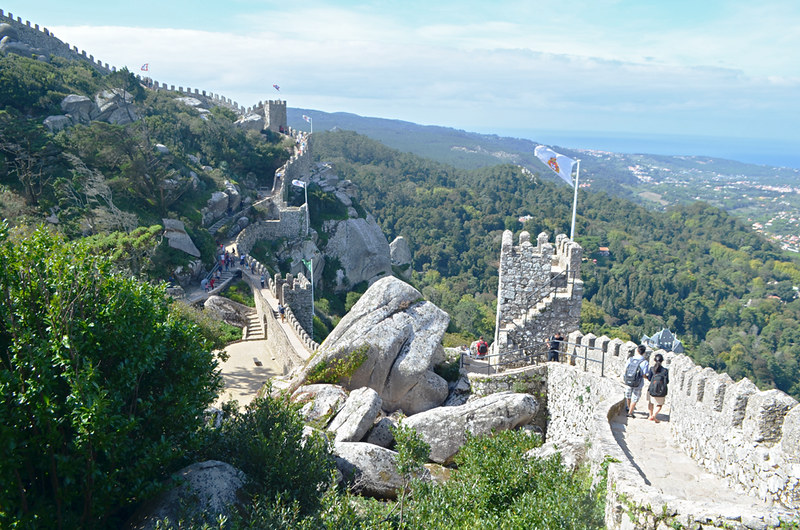 It’s a maze of a place and we spend far more time than we’d anticipated exploring its keeps, walls, stables and granaries. A coffee (€1.10 which is pretty good for a café inside a tourist attraction) and a Kit Kat halfway around helps re-energise for the walk back to town through grounds that are part forest, part park. 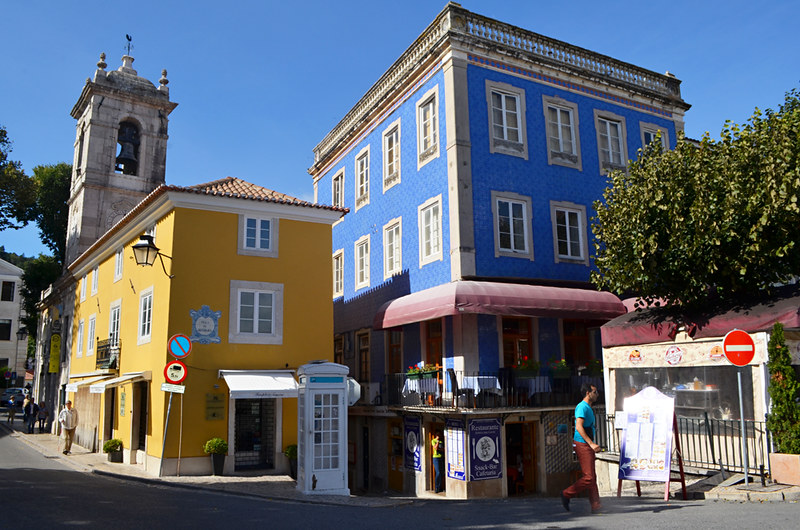 Another route would take us to the Park and National Palace of Pena, a Sintra highlight which should be a must for any visitor. A must if you’ve got time. We still haven’t had lunch and the afternoon is well into its stride. Instead we return to the centre of Sintra and to Piriquita, a café with an unusually humble façade which is famous for its pastries, especially Queijadas de Sintra. Again, despite its popular location, the pastries are excellent value. It’s refreshing to note that a town which is such a tourist draw doesn’t exploit its popularity by hiking up the prices. 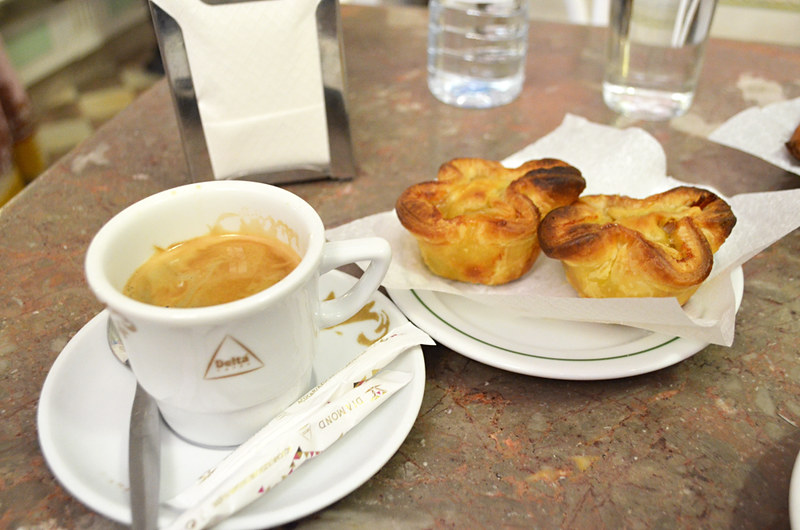 We’ve misjudged just how much there is to see in Sintra – the Regaleira Palace and Gardens, the Capuchos Convent, Monserrate Park and Palace – and how far apart they all are. Each palace, park or fort takes a substantial amount of time to explore properly. Basically, a day in Sintra only allows enough time to act as a taster. It’s still worth making the journey, but it would be better to actually stay in Sintra for a night or two.

Reluctantly we make our way back to the train station, taking a brief detour to check out some of the strange creatures who inhabit Parque da Liberdade. 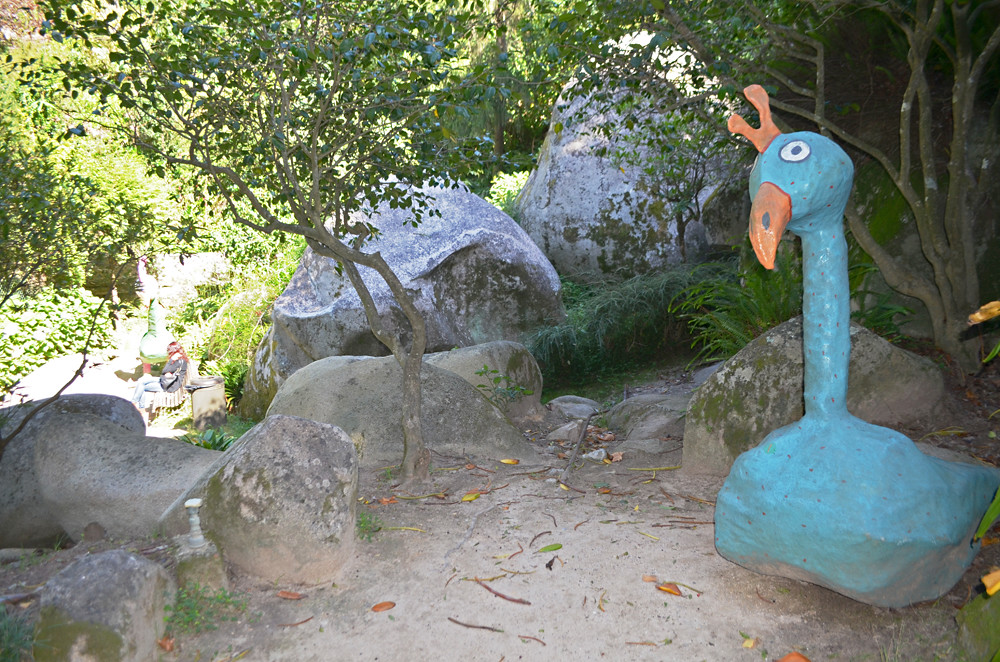 This is Sintra, it’s more than palaces and museums. There are eye-catchers everywhere. An aloof mausoleum it definitely isn’t.

The Parques de Sintra website is extremely useful for planning a visit, even if all of the neat little ideas (price and planning visit simulators) don’t actually work as they should. Entrance prices to palaces and parks range from €7.50 to €13.50 for adults. If planning on visiting more than one, a combined ticket is best value.

“Where’s the castle?” asked the woman as she arrived, breathless, at the top of the turret of Alcozaiba – the iconic bell tower of the Castell de Guadalest.
“It’s not here. There are just some more steps and then nothing,” replied her husband.
And they’re not alone. All around us I can hear people asking how and where they get into the castle. […]

Eight of the most beautiful towns in Portugal

Marvão comes in at first position as it dominated our view for four months. Perched on a rock overlooking the golden Alentejo plains, this walled, Moorish town near the border with Spain is as stunning up close as it is from a distance. […]