Years ago a friend took us on a walk near her boyfriend’s house in North Yorkshire. It felt like we’d been walking for hours and yet all we could see, stretching for miles and miles, was a flat featureless landscape stretching out before us.

Whilst the scenery had been quite bleakly dramatic initially, and there had been seals to coo over, walking through it for hours without it changing had stripped it of its charm. Mumbling, then grumbling and finally mutiny broke out in the ranks – the ranks being the three of us who weren’t emotionally involved with anyone who lived in the area.

“Is there no end to this?” One of us bitched.

“Round the next corner,” came the perky reply from our friend.

The fact that there were no corners in sight gave away there was still a long way to go before we were going to reach anywhere.

We rebelled and entrenched ourselves in the first pub we passed (unfortunately a few kilometres further on) where we had a couple of beers before we caught a taxi back to base. 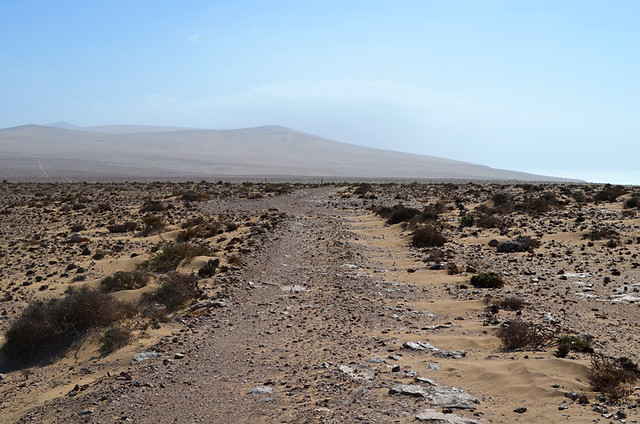 I was reminded of that walk as we stared south across a flat desert landscape that covers the waist of land between the bulk of Fuerteventura and the Jandia peninsula. The view wasn’t exactly to infinity and beyond but the vague hills which marked the end of the sandy desert were a long, long, long way off.

We were researching routes on Fuerteventura and had parked in La Pared to recce the area for any suitable walks.

La Pared has got to be one of the most depressing places I’ve visited. I can’t actually put my finger on why, but there was something about it that left me feeling uneasy. It’s got an end of the line air to it. I usually like end of the road places but there was something about La Pared that brought on a feeling that I can only describe as melancholic. 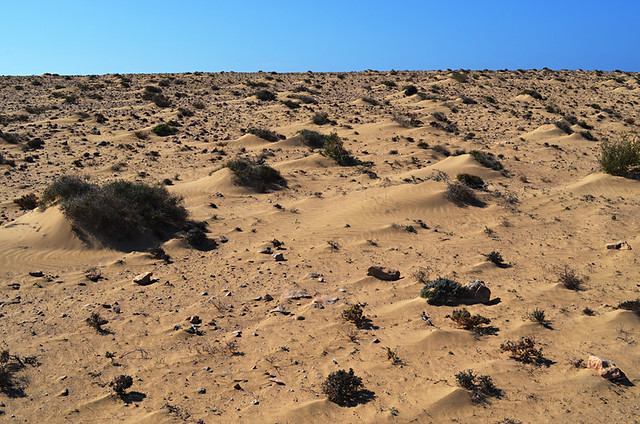 Maybe we were tired, it had been a hard week, but it was with reluctance we set off along a path into a terrain of sand and hardy little bushes. Maybe it was the wind that whipped sand sharply against exposed flesh. Maybe it was the fact that we could see the route stretching way ahead in front of us and the scenery all around was identical.

I visualise walking through a desert and I think of Lawrence of Arabia or Beau Geste – romantic, if unrealistic, notions of walking through a sea of golden dunes. Walking in the dunes at Corralejo are a bit like that and there’s something exhilarating about it. 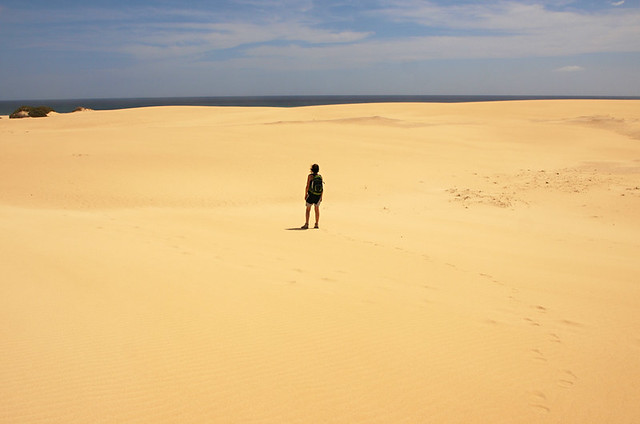 This one was just endlessly dull. We walked for nearly five kilometres before we stopped and asked the question that has to be asked of any walk.

“What’s the point of this?”

We looked around, debated that there might be a stunning beach just around the next non-existent bend. But so what? Why walk through an inhospitable dessert to find a beautiful beach on an island where beautiful beaches come as standard.

We came to the obvious conclusion. There was no point.

We turned tail and started to walk back to La Pared. At least the views heading north were more interesting. 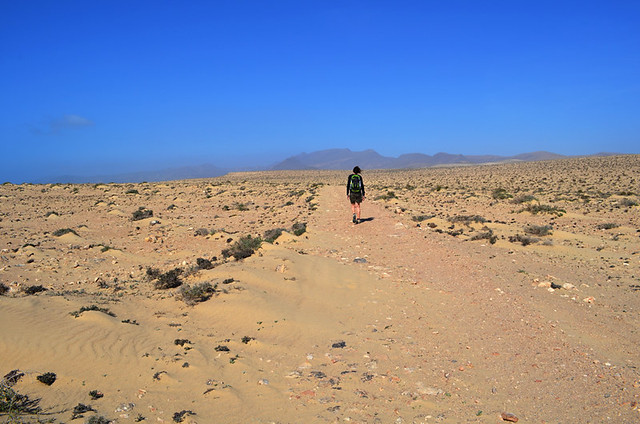 The beach at La Pared is supposed to be quite special. I’ve seen images and it does look good. But by the time we reached dreary and dusty La Pared both landscape and resort had managed to suck all enthusiasm from our bodies. It’s not like us at all, we simply couldn’t be bothered putting in the effort to go and take a look at it.

It’s said La Pared is so named because of an ancient wall that once ran from east to west coast, splitting the island in two. Possibly it was a lingering invisible trace of this wall which had seeped into our subconscious and made us want to turn back.

We jumped in the car and headed north. I think we possibly sang a couple of Leonard Cohen songs to cheer ourselves up.