I feel slightly queasy. The object lying limply on my friend’s plate opposite is the culprit; the cause of an annoying wave of nausea lapping at the back of my throat, threatening to become a tsunami which bursts forth from my mouth.

Maybe it’s because I’ve got a mild case of flu, punishment for venturing into what are zombie wastelands at this time of year – holiday resort dining rooms. Places where the undead shuffle between dried up basins of homogeneous dishes found in a certain type of hotel buffet, and those neat rectangles of synthetic desserts which all taste the same. 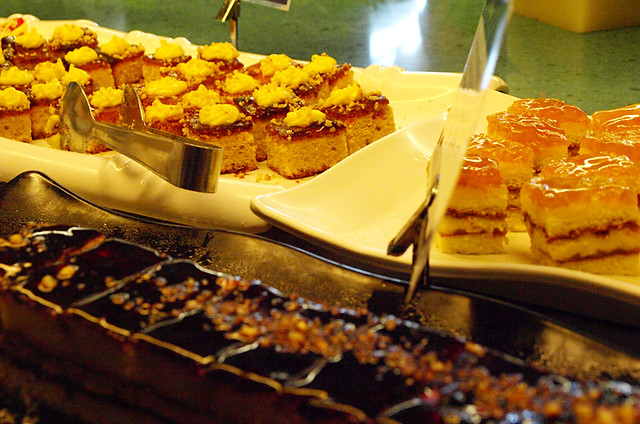 Their mission is to recruit more to their sniffling, rasping ranks. It must be. Why else would they prod food with their diseased fingers rather than use the tongs provided? In one case a woman chewed on a tough churro as she walked, placing the saliva-drenched offending object on every counter she paused at. I couldn’t stop myself from stalking her, mouth agape, horrified and disgusted. Many heads in the dining room turned our way. But it wasn’t the spreader of germs they eyed with suspicion, it was me – the Kevin McCarthy of the scene.

Maybe the flu is the cause of my queasiness, but I don’t think so. My friend is one of those people who orders his steak ‘well done’. A year ago I’d been the victim of this culinary crime when a waitress had given him my steak and me his. He’d enthusiastically wolfed most of mine before I could swap them back. 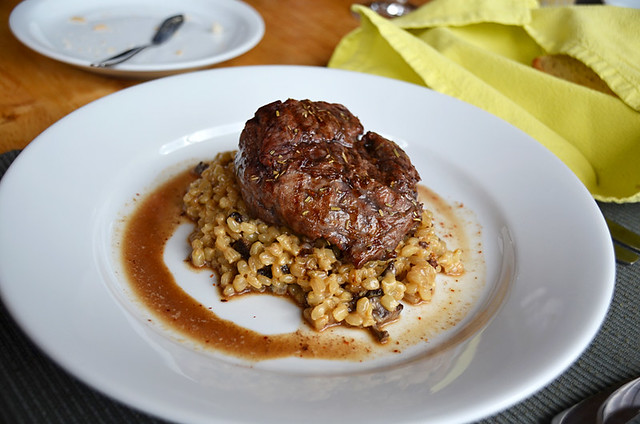 This time there would be no repeat. As a result, I sit facing the thing on his plate; an inferior slab of insipid grey, overcooked meat retrieved from the murky depths of the fridge no real chef likes to venture near. It is folded in two and drenched in pepper sauce to make it look more like the ‘real’ cuts of meat on our plates, but it is fooling nobody.

Even my solomillo, perfectly pink and moist, has my taste-buds backing off, metaphoric crucifixes raised in defence.

As I stare without enthusiasm at the chunky cut on my plate realisation dawns that influenza isn’t the cause for a loss of appetite, it’s something else altogether. Somewhere over the last year or so I’ve developed a preference for raw meat and fish. Even ‘medium’ looks too overdone to me. 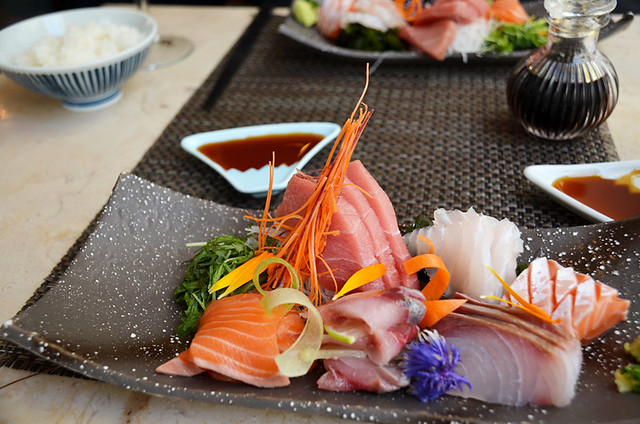 I do a quick mental calculation. In the fourteen restaurants we’ve eaten at in the previous month raw, or nearly raw, meat and fish dishes have featured in eight of them, sometimes more than once.

Two years ago, watching Gollum sink his teeth into a fish plucked straight from a lake would have had me recoiling in horror, but now I am virtually no different. I’ve reached the point where I rub my hands above plates of sushi, gleefully repeating “my precious, my precious” over and over again. 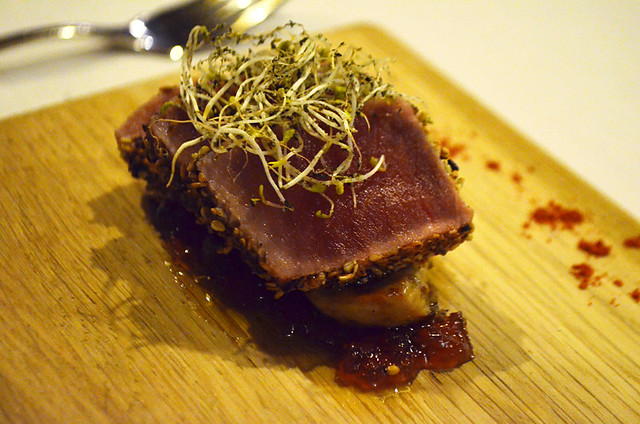 It started innocuously enough with tuna tataki in a colonial restaurant on La Palma – the bright and colourful flesh of the seared tuna steak looking far more appealing than one which had all the life and goodness cooked out of it. It not only looked more appealing it tasted far better than many tuna fillets I’d eaten in the past, the zingy Asian influences perking up the fresh, tender, raw centre of the delicate slices. I didn’t even think of it as eating raw fish.

Then it was steak tartar prepared at our table by the chef in the Hacienda del Conde in Buenavista del Norte, Tenerife. Minced raw beef had never tasted so peppery good. 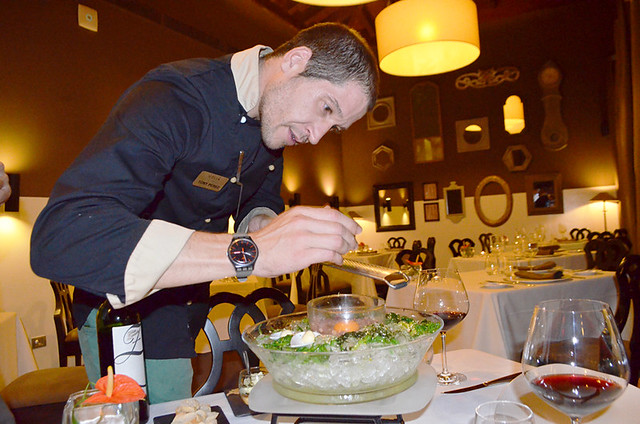 We were off and running – a roller-coaster ride of fresh, fishy flavours on the taster menu at Michelin star Japanese restaurant Kazan in Santa Cruz on Tenerife cemented our increasing passion for the rawer things in life.

A trip to Chile sealed the deal; perfumed, aromatic, refreshing, exuberant, picante ceviche in Santiago seducing and serenading us to the opposite side of the culinary dance floor from over-tanned meats and borderline dry fillets of fish. 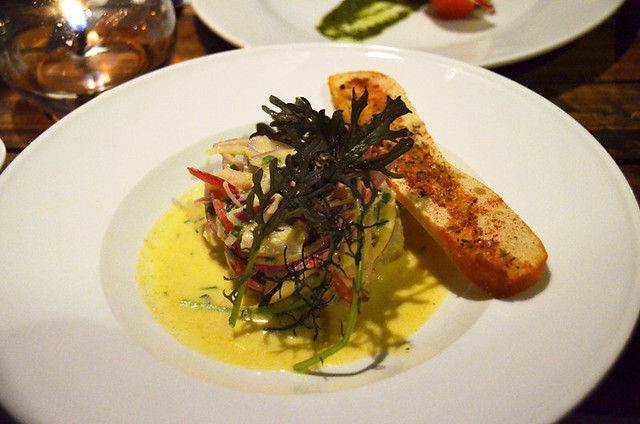 After that, opting for anything remotely close to being well-cooked seemed as perverse as a vampire tossing their latest victim onto a bonfire before sinking their fangs into a barbecued neck. We wanted fresh… we wanted raw.

Subsequently, in the last month we’ve relished a trio of ceviche in a Peruvian restaurant in Lisbon, followed by a sushi lunch the following day and tuna tartar in Setúbal a few days later. In various restaurants on a trip around Tenerife we veered towards the least cooked dishes on menus – beef carpaccio, lightly smoked fish, briefly seared scallops. 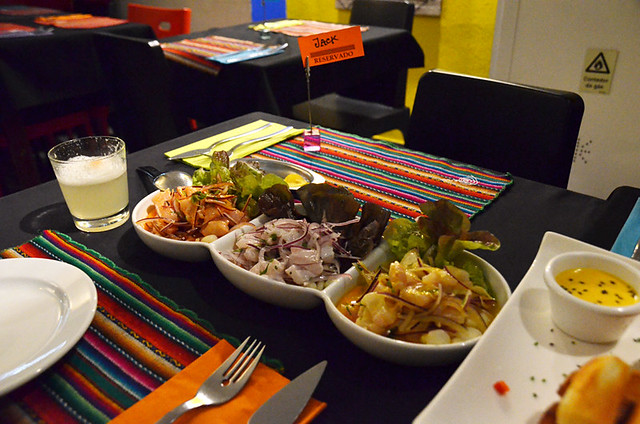 It has reached a point where I even ask for ‘raw’ dishes not actually listed on menus.

At El Jinete Sin Cabeza (Headless Horseman) in La Laguna a few days ago I waited whilst the waitress ran through their select menu, only half listening.

“No ceviche?” I asked. I was sure I’d seen a photo online of a plate of ceviche in the restaurant.

They didn’t have ceviche, but they did have steak tartare. Guess what I ordered? 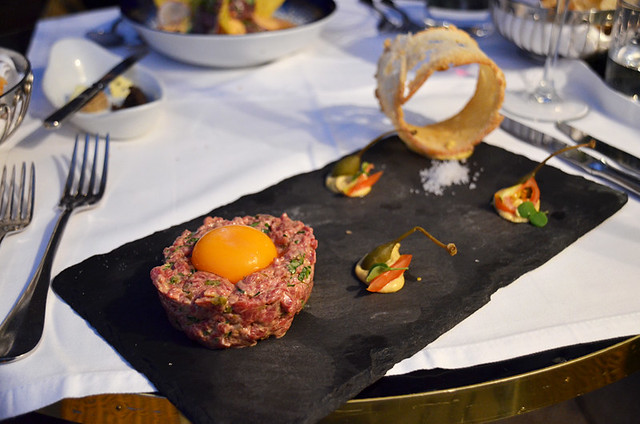 The move to increasingly ordering raw, or less well cooked, dishes in restaurants hasn’t been a sharp, drastic one. There’s been no conscious decision involved. It has been a gradual shift; one that was imperceptible until we realised it ourselves.

But you know what? I don’t care. These dishes taste as fresh as the first days of spring; they feel new, different and, in the main, give our taste-buds a thrilling experience. As far as I’m concerned that’s as good a reason as any to embrace life in the raw.

Like a living barometer, you don’t need a calendar here on the farm to tell you when the seasons are changing, the animals do that for you … […]