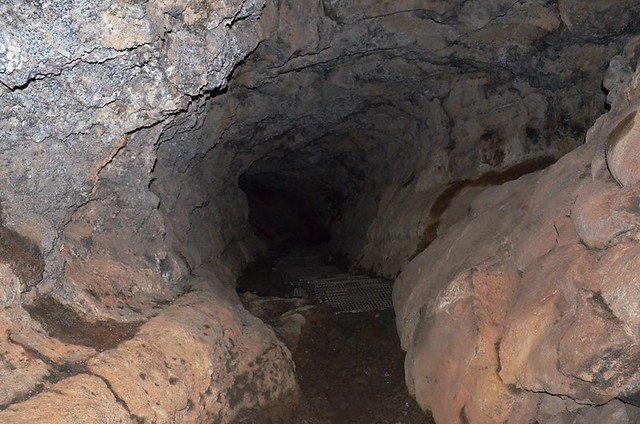 Eyeless cockroaches – Cueva del Viento, Tenerife
Once you’ve been told the cave, or volcanic tube to be more exact, was once home to eyeless cockroaches and giant rats it’s hard to banish thoughts of mutant creepy crawlies from your mind. It’s especially difficult when you can see webs which show that insects of some sort still inhabit the Cueva del Viento on Tenerife. Stretching 18km, it’s one of the longest of its type in the world. A guided tour makes it feel more comfortable and the beasties are now extinct… or so scientists believe. There’s still a lot of cave to be explored, so who knows what really lies in its darkest depths. At one point visitors are asked to switch off head torches – the blackness which falls is as complete as you can imagine. Nothing exists, nothing. I became only what lay inside my head… and then my stomach rumbled loudly and all philosophic pondering was stopped rudely in its tracks. 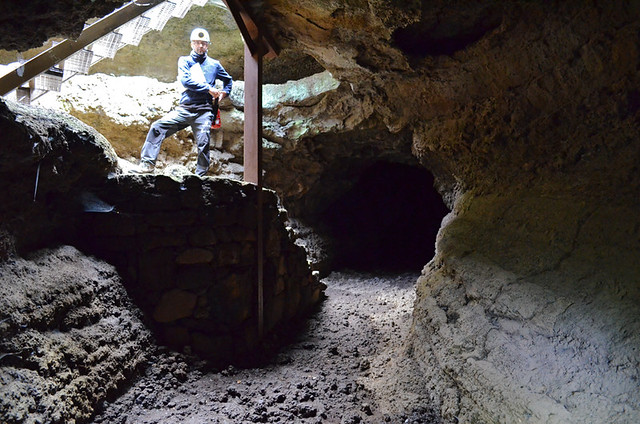 A mythical creature – Cyclop’s Cave, Crete
Google ‘Polyphemus Cave’ and a few different locations come up. I’m discounting the one in Alexandroupoli as fake as those who have visited it describe it as a den. The one we scrabbled our way up a hillside to above Sougia in western Crete was the size of a small cathedral inside. Neither did it have hordes of tourist scouring about looking, as I did, for human bones which had been picked dry by a hungry, one-eyed giant. It’s not easy to get to if you’re not reasonably fit. It’s also ideally placed for flinging rocks at an escaping ship as described in Homer’s Odyssey. And, unlike another Cyclop’s Cave in Sicily, a giant could easily roll a boulder across the entrance to trap ‘dinner’ inside. But the entrance is a problem. A Cyclops may be able to stand tall and proud once inside, but there’s no way he could squeeze his bulk through the small entrance which makes the cave hard to find. Maybe there’d been a rockfall or two since Odysseus made his escape clinging to the underside of a sheep. 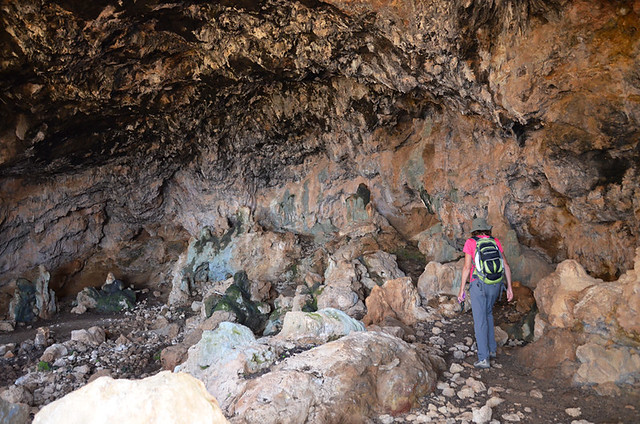 Bats – Phra Nang Nai Cave, Krabi Thailand
Phra Nang Nai Cave in Krabi looks as though it’s been tarted up so it’s all bright, shiny and tourist friendly. When we made the attempt to walk the fifteen minutes or so it was supposed to take from its inland entrance to the beach things were very different. There were no lights, no entrance fee, no other tourists and we had no torch. But there was a wooden walkway, visible in the faint light from the entrance. After a few minutes on the rickety walkway we were engulfed by a black hole, the way forward an impenetrable inky curtain. It would have been silent apart from intermittent odd noises in the darkness, sometimes alarmingly close, at other times a flutter in the distance. With each ginger step the noises grew in intensity until our nerve broke and we turned and bolted for the entrance pursued by a dense, erratic cloud – the resident colony of bats. 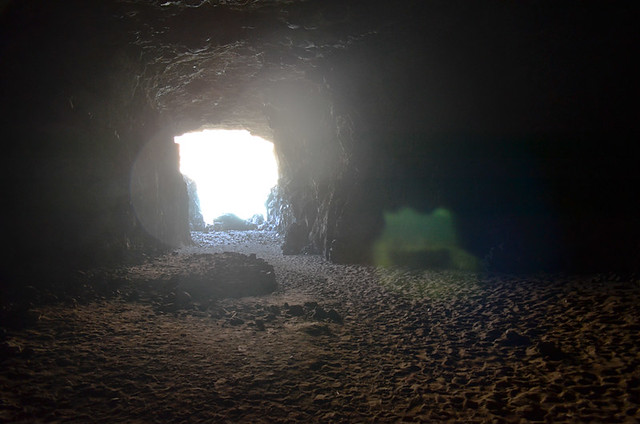 A ghost – Ajuy, Fuerteventura
What could be scary about a sea cave visited by bus loads of excursionists daily? Ajuy Caves on Fuerteventura is hardly a hidden natural oddity. But the steep access reduces the number of people who actually explore these enormous caves. Plus, the second cave takes a bit of agile scrambling to get to, cutting numbers even further. It is here, in the damp murky interior where a smaller cave leads deeper into the rock, the atmosphere morphs from an interesting natural attracting to something more unnerving. A strange aura hangs in the air, the sea (maybe, maybe it isn’t) sounds like the whisper of the corsairs and pirates who were said to have carried out their illicit trade in the caves. Maybe an overactive imagination caused my spine to go all shiver me timbers. All I know is there’s a Ghostbuster-esque slimer on the photos I took in there. 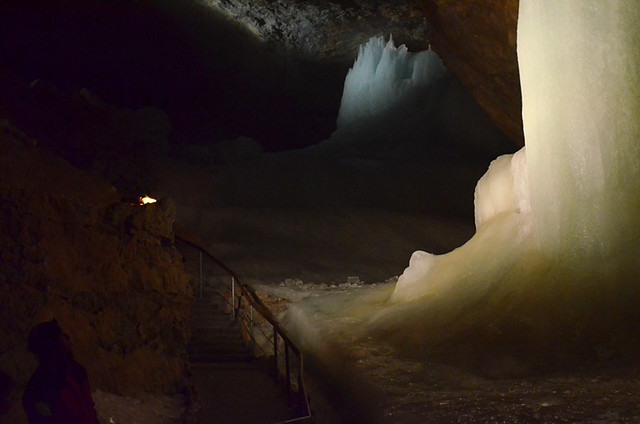 Ice sculptures – Dachstein, Austria
With names like Castle of the Holy Grail and King Arthur’s Dome, the Dachstein Ice Cave in Saltzkammergut could easily have fallen into the overly sanitised, theme cave category. But it doesn’t. For a start, maybe stating the obvious given what makes it an attraction, it’s cold, -2C. Even warmer water which makes it way into the cave in summer months can only make minor adjustments to the naturally forming gigantic blue ice sculptures before it too becomes part of the exhibit. It is an enchanting cave with a hard edge, the sort of place where Game of Thrones’ Night King would throw a party for his undead legions. As a bonus, the mountain which hosts it is full of other quirks – a mammoth cave, the five finger viewing platform… a shark. 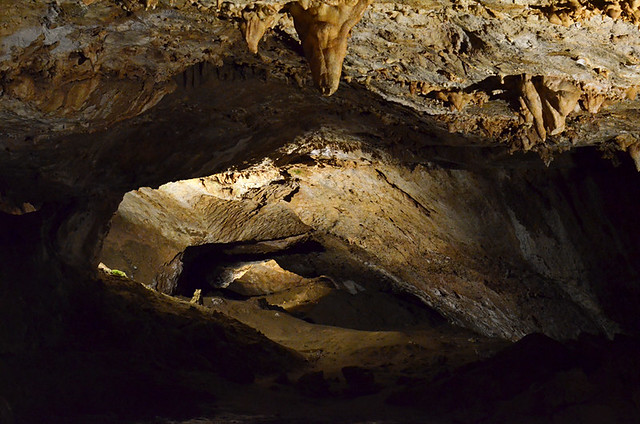 Blind faith – somewhere in Sheffield
The first proper cave I entered was whilst on a works outward bound course in the Peak District. I can’t remember which cave, possibly because the experience erased it from my memory. Not that it was bad… not for me at least. One girl had to be carted out of the cave after suffering a serious anxiety attack. To be fair, it was intense; that was the point. Two memories remain deeply etched into my brain. The first involved crawling through a gap where the roof of the cave was only a few inches above my back and my hard-hatted head kept scraping the rock. I couldn’t shake the thought if the earth shifted even slightly, we’d be trapped underground. The second involved using a rope to descend into a black abyss, so black it was impossible to see the bottom. When it was my turn I lowered myself backwards, feet edging backwards down the rock face until a voice from the darkness instructed me to stop, lower my feet from the rock and then to let go even though I couldn’t see terra firma below. It required total trust. I did what was instructed and fell… about three inches before my feet made contact with the ground. It was quite bizarre, and immensely liberating. 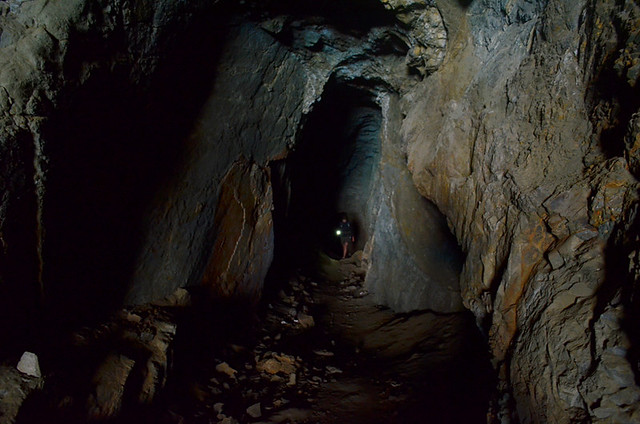 You never know until you take the plunge and delve into the blackness.