Back in the days when we were suited nine to fivers we always booked holidays for late May/early June and then again around September/October. Colleagues with children, understandably, had first choice at the summer months, leaving the rest of us to pick from those periods which didn’t include school holidays.

It suited us. We like places when they are just out of season. I don’t mean like a Greek island in the depths of winter when everything is closed. I mean when the season might be gearing up to begin or is just starting to wind down. Additionally, we prefer locations which exist for a local population rather than just a transient one. These destinations have their own local rhythm and never really close down. Choose wisely and you find the weather is still warm, it’s easier to get into bars and restaurants, and beaches are not claustrophobic. 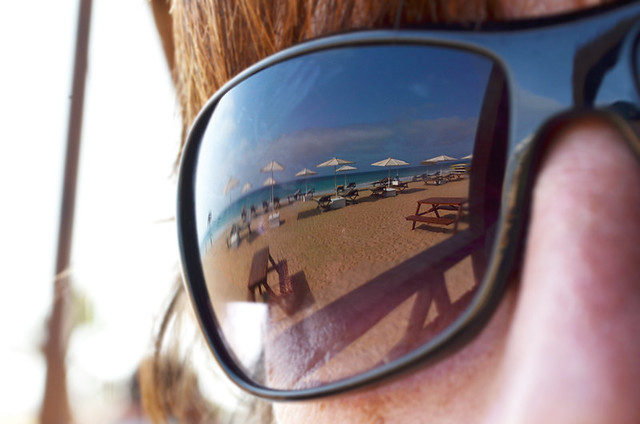 Even though our careers have moved onto a different track, we still find we end up visiting more destinations during these same periods… and we’re still enjoying crowd-free experiences.

Mostly now we end up walking across beaches rather than using them for bronzing purposes, but that’s not to say we have lost our appreciation of soft, white sands being lapped by crystal clear seas (a cliche, but who cares, that’s what they are).

These are some beaches we’ve warmed our tootsies on in recent years either before the crowds have arrived or after they’ve left. 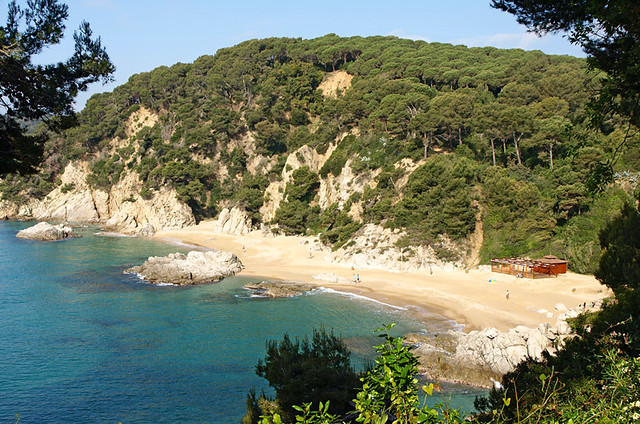 Early May and the temperature was warm enough for a couple of blokes to lounge on the rocks ‘sin ropas’ on this lovely, little cove beach below the Santa Clotilde Gardens at Lloret de Mar. I could have used a close up shot of the beach but, believe me, you wouldn’t have thanked me for it. 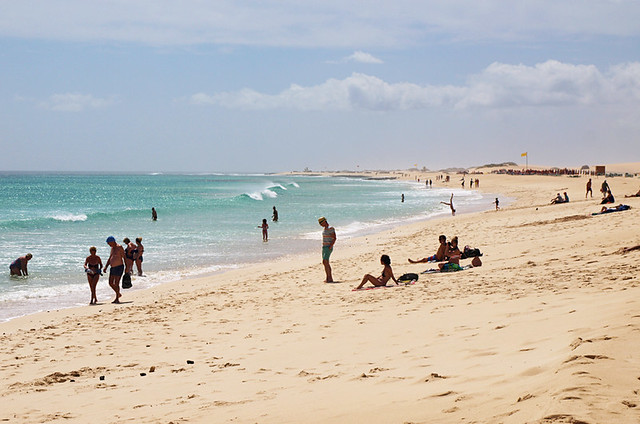 Travel websites regularly go on about the wonderful beaches in the Canary Islands, but the reality is most beaches on the western islands are only run of the mill at best. Before anyone goes all pouty on me for saying that, I actually prefer the western islands overall. But when it comes to beaches, the natural golden wonders are found to the east. This was Corralejo Dunes in March, not at all low season in the islands but Corralejo Dunes are like the Sahara so can swallow crowds. The downside is it’s a place to get sandblasted. Totally buggered up one of my cameras. 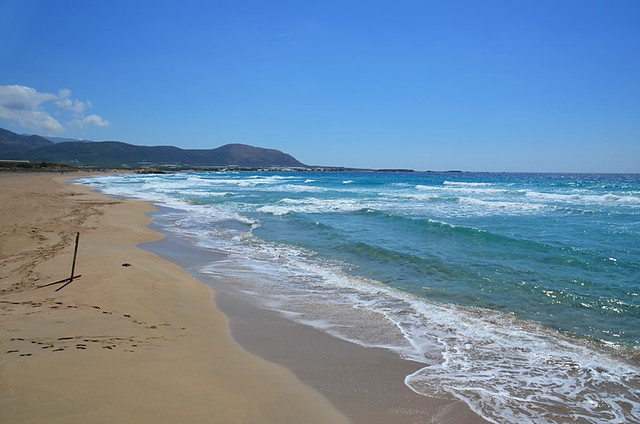 April and whilst we were sweating buckets walking across western Crete, beaches such as this expansive beauty at Falasarna, were mostly devoid of people. The only other people near us on this beach were a young couple notching up their selfie quota posing in the surf. 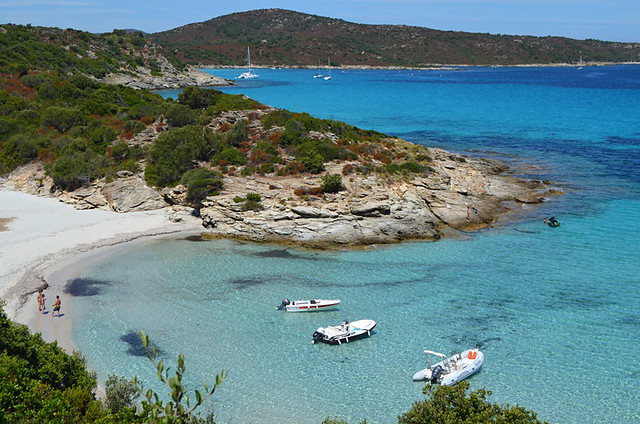 What’s the collective noun for a group of idyllic coves? No matter, Saint Florent in the north of Corsica has droves of them. A relatively easy coastal walk from Plage de Lotu back to Saint Florent took us far longer than it should have done because we were stopped in our tracks regularly by views like the one above. It was one of the best ends to a walk we’ve experienced, walking barefooted, and dodging a flying Zodiac, along the beach leading back to our hotel. This was getting towards the end of June – hot but still not busy. 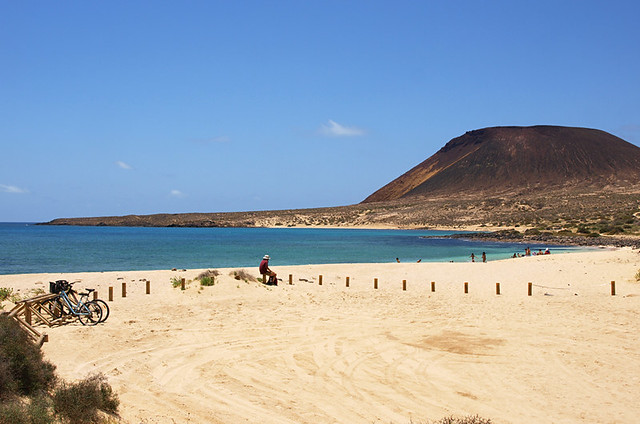 Another Canary Island, La Graciosa is one of the small ones, looking more like it belongs in the Pacific than the Atlantic. It’s just one big sandy beach, even the streets in the island’s main village are sand. We did get to lie on this one for a short period after being dropped off by Zodiac – a cool way to arrive at any beach. It was the one and only time we’ve been on a walking route where fellow ‘hikers’ wore bikinis. This was mid May, the closest to low season as you get in the Canaries. 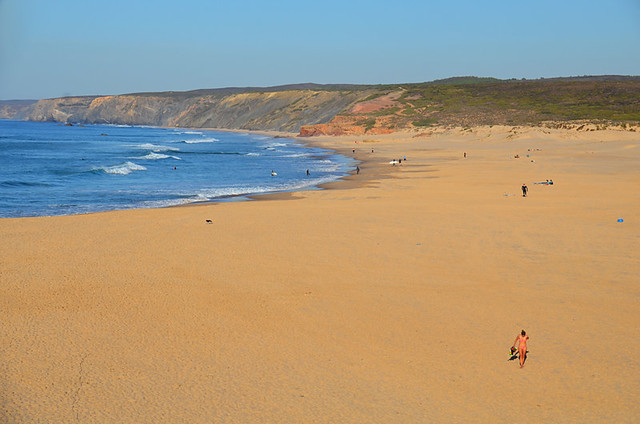 Late November in the Algarve and I could have posted a picture of any number of beaches which would blow other destination’s beaches away in the looks department. It was a trip that made me realise why the Algarve was such a popular tourist destination. But for me, the Algarve charmed more away from the resorts. Praia de Bordeira is so huge you have to be pretty fit to make the walk from the beach’s car park to the water, especially as there’s a lagoon to negotiate as well. 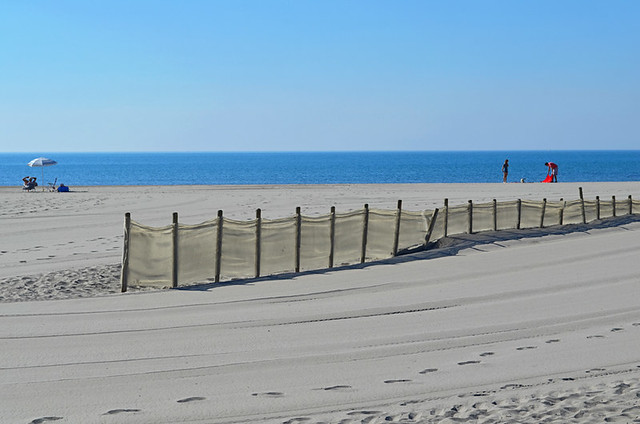 It was only the end of September and still felt like summer, but a number of restaurants in the Camargue had already closed for the season. One place which still buzzed was Saintes-Maries-de-la-Mer, where the Rhone meats the Mediterranean. It’s a place known for wild black bulls, white horses, Gypsy kings and sitting on the rooftop of a church. Despite the weather, the wide beach was empty.

And finally, somewhere else in Portugal 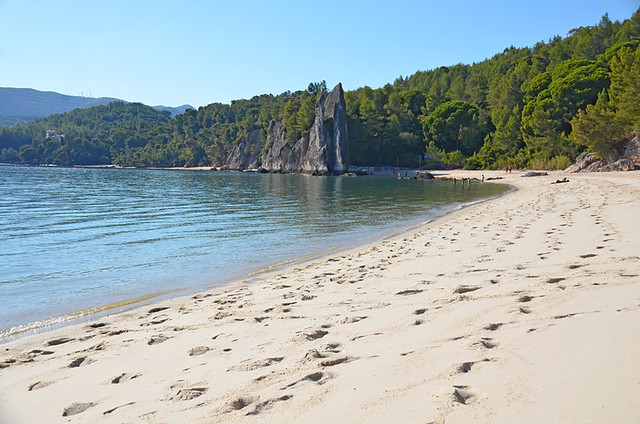 Late October and gloriously warm… too warm. This beach rocketed into my personal list of top 10 beaches when I saw it – any place where the greenery comes right down to the water’s edge does it for me. It’s hardly a secret beach, it gets rammed in summer, but not so well known outside of Portugal. Where is it? Err, the name escapes me for the moment. I’ll get back to you on that… maybe.