Mackay can be on the bullish side, pushing past to always be first to get the best views, or standing at the prow of the Zodiac as though he’s captain.

But his gruff, butch facade crumbles when face with a rickety ladder climbing through the jungle. His short legs are just not long enough to bridge the gap between rungs. His bushy eyebrows furrow and a worried whine escapes his mouth. 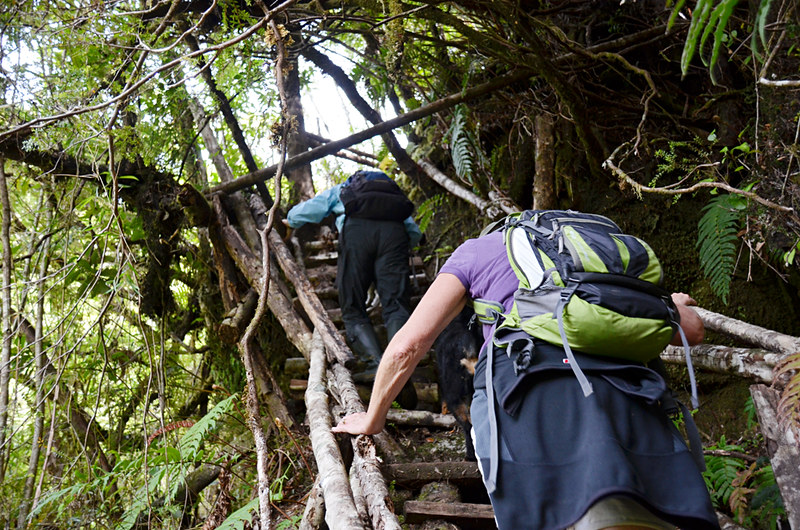 I’m sure the dog smiles.

Patricio is owner of Posada Quelat, a series of wooden cabins dotted around a garden of Eden with gunnera’s so huge I could have used one as a hammock. We’ve been at Posada Quelat for two days, and have completely relaxed into a way of life which has erased stress from our vocabulary.

It’s a chill out zone plus. Even a jaunt from our tranquil sanctuary onto the gravelly Carretera Austral in order to hike to yet another Chilean super scene, the nearby Ventisquero Colgante (hanging glacier), felt like a relaxing adventure. 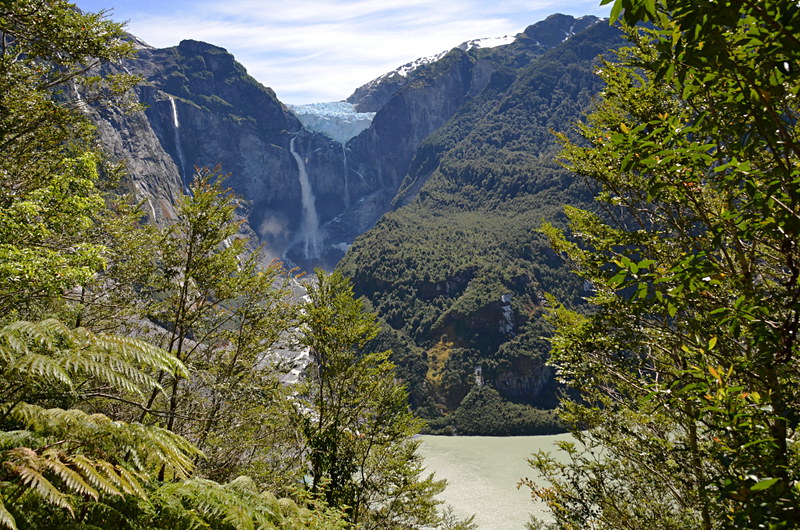 For two days and nights we’ve converged on the main house for a communal breakfast of scrambled eggs and homemade jams served with breads the shape of discus; post-hike craft beers; and dinners consisting of lake fish. We ate with other guests, a British couple who we hit it off with right away, and hosts Patricio and Rosario. It’s cosy, friendly and as deliciously comfortable as sliding under a thick duvet on a cool evening. It feels more a family get together than staying in a rural guest house. 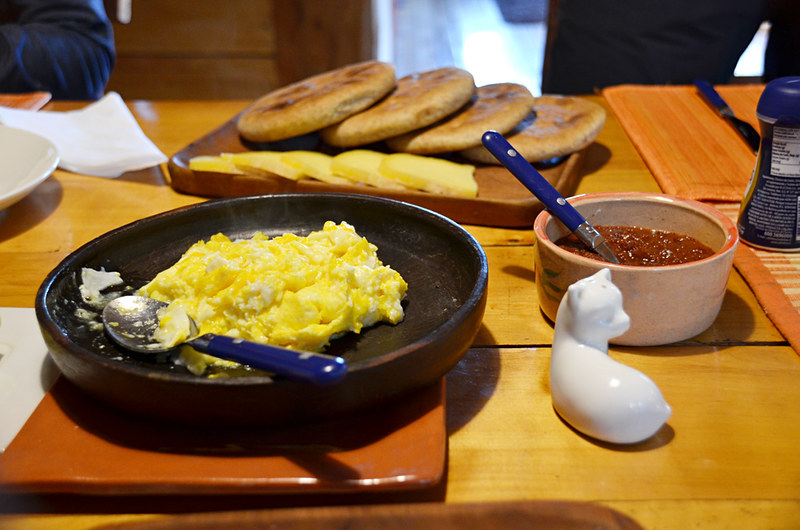 When dinner is finished, and a bottle of smooth and fruity Chilean wine has slipped down as easily as silk on a smooth thigh, we return to our wooden cabin and sit on the porch marvelling at what seems like as perfect a world as can be. There’s an element of feeling as though we’re still in a frontier land in parts of Chile, experiencing a world which lies at the edge of civilisation. 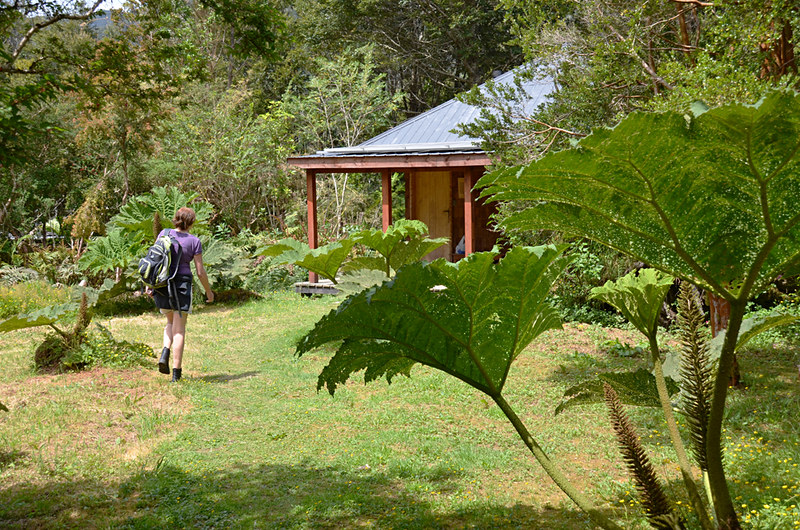 Our last night is a bit different. Rosario and chef Juan have had to return to Coyhaique. There are no other guests, save for a quartet of cyclists who rolled up in the afternoon and who Patricio let set up camp near the river. Tonight it’ll be just us and Patricio for dinner… and Patricio is no cook. 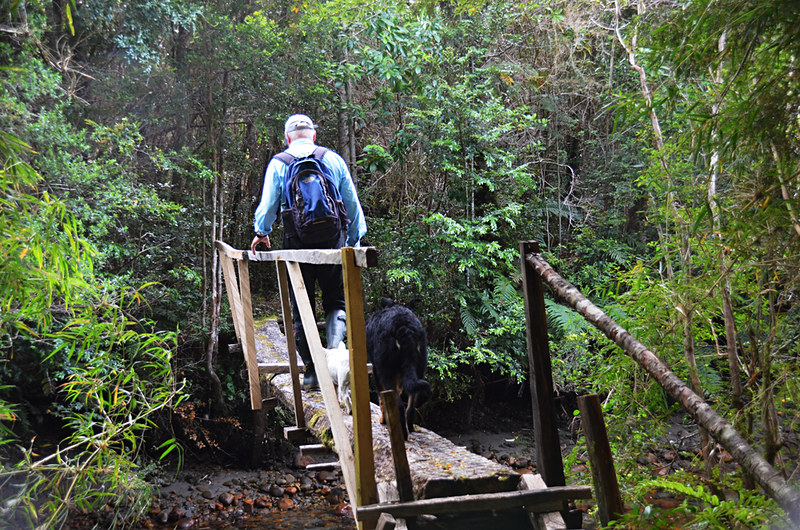 As we climb through the jungle, crossing narrow bridges “only one at a time” (advice totally ignored by Mackay and Flo, a sweetheart of a black Labrador) and tackling makeshift log ladders, all built by Patricio, the phone rings on a regular basis. First it’s ebullient Rosario who really doesn’t need a mobile to communicate from Coyhaique a couple of hundred kilometres away. Then it’s Juan, still back at the Posada, making final preparations before he leaves. The topic of the phone conversation is the same over a series of calls; Patricio is being given clear instructions on how to look after us, especially when it comes to dinner. Juan has prepared a dish which he hopes even the most novice in the kitchen could follow – a pasta sauce. All Patricio has to do is heat it up and simmer some pasta. 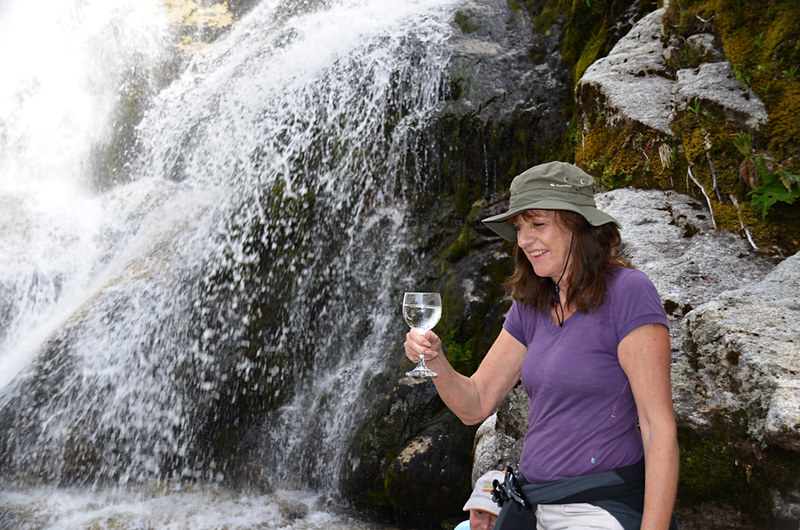 Our trail emerges at a flat rock beside a waterfall whose powerful torrents totally transfix Mackay. Patricio frees a wine glass from a V of branches in a tree, bends and scoops up some water. He takes a long glug, bends, and fills the glass again before offering it to us. The mountain water is pure, crystalline and as sweet as any I’ve tasted.

We turn our attention away from the falls and look outwards across the dense forest canopy to the river and Posada Quelat way below. It’s all Patricio and Rosario’s land. We won’t be passing any other walkers on this route. 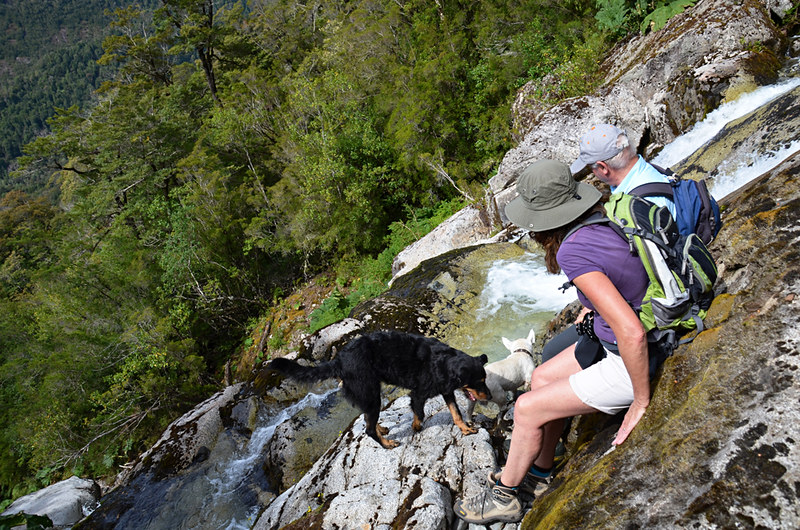 We descend to the river and into the Zodiac which will transport us back to the cabins. Mackay travels with us in the dinghy, Flo swims. That’s just the way it always is.

As we near the opposite bank Patricio asks: “Do you mind if we take a little detour?”

The Zodiac veers away from terra firma and we pass the four cyclists setting up camp. Too close to the river.

“They’ll be flooded by three in the morning when the tide rises,” Patricio laughs. “I’ll tell them to move higher when we return.” 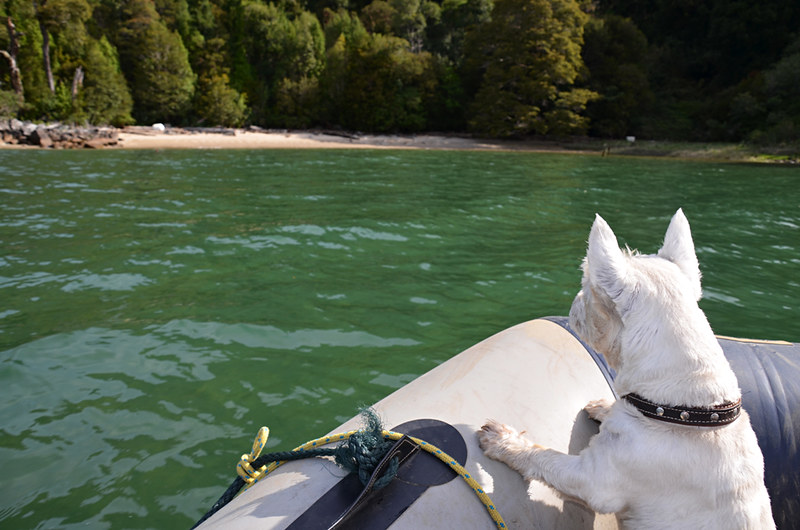 The cyclists are no ordinary cyclists, they’re members of the British Paralympic team cycling the Carretera Austral. Driving it is challenging enough, cycling it is for superheroes only.

The Zodiac follows the line of the bank, Flo running to keep level hoping to join us wherever we end up, Patricio steering with purpose, Mackay paws up on the dinghy’s prow his tail wagging excitedly as we pass kingfishers, cormorants and a lone condor. 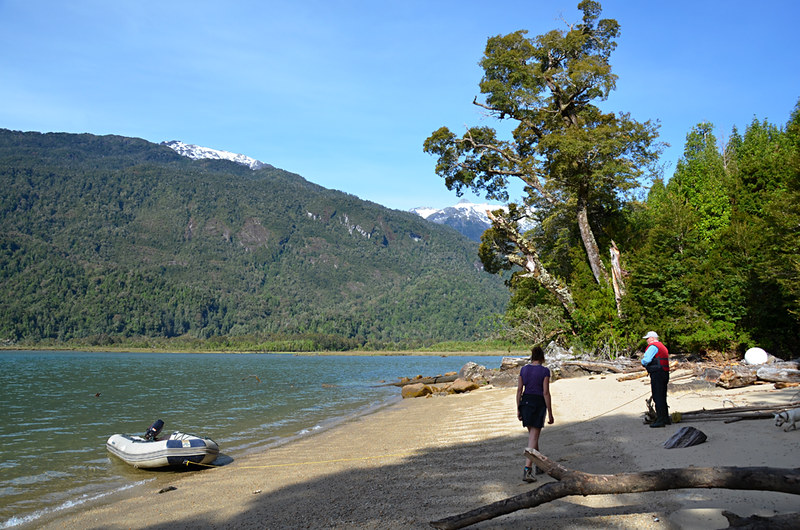 Patricio’s objective is a lakeside beach of golden sand behind which is impenetrable forest. At one end of the beach is a huge white ball which appears as though it might have rolled down from the snowy peaks around us. Who knows how it got there? Patricio ties the Zodiac to a tree trunk washed up on the sand, then sits with his back against another log, simply staring quietly out at the overpowering view. We find our own spot and join him.

It’s clear Patricio is a man in love with his surroundings. It’s understandable, Quelat is one of the most seductive locations we’ve had the pleasure of setting eyes upon.