I don’t like coach excursions. I know they’re a convenient and hassle-free way for some people to get to see more of a destination than they would otherwise. But they’re not for me. There’s usually too much herding going on and not enough time to be able to appreciate things. It can be a bit like being allowed a bite of a meal, but that’s all.

So, when the coach drew up outside of the Hotel Elba Palace on Fuerteventura my heart fell.

The hotel had arranged the trip and all we knew was that it involved the ‘flavours of Fuerteventura’. We thought it was going to be a small tour seeing, and tasting, things that people didn’t normally connect with a Canary Island known for its golden beaches. 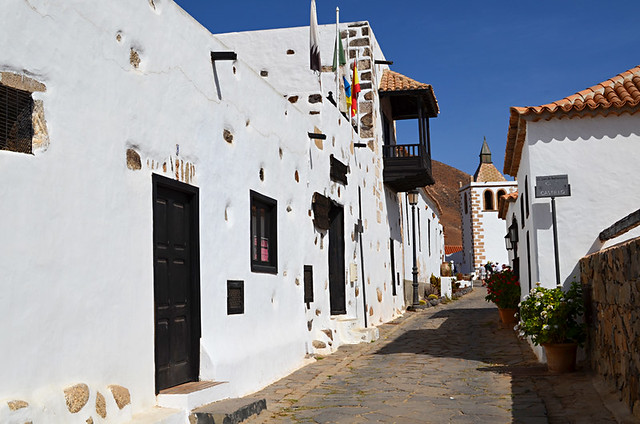 Basically there was a bit of muttering beneath the fixed smile ‘hellos’ as we took our spot on the bus.

But a couple of years ago a coach tour in Scotland we’d expected to be a bit naff had shown us that to pre-judge is a mistake.

Things quickly improved a bit when our big coach was swapped for a few minibuses in an industrial estate a short distance from the hotel.  I say ‘a bit’ as I was squeezed next to a sweaty man with hairy shoulders wearing a vest tee shirt. You could say I slid in next to him.
There were a few rolled-eye glances toward Andy who was in the seat behind me. I don’t enjoy when we’re separated either, so that didn’t improve my cynical mood. 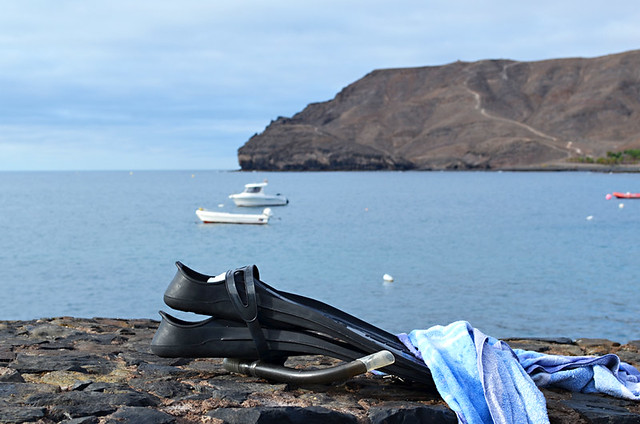 The first port of call didn’t do anything to lift my spirits; a pointless wander around a cool and cloudy Las Playitas where everything was yet to wake up save for a JCB dredging the beach. 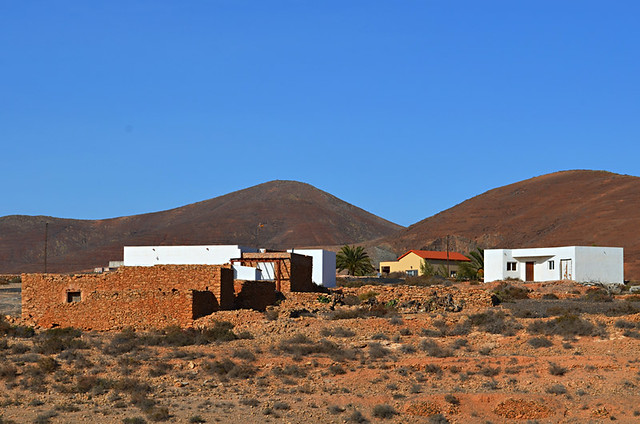 Then the clouds literally and metaphorically lifted as we made our way inland. The landscape started to work its magic, vibrant orange peel coloured hills exploding into life as the sun yawned, stretched and finally cast its rays across them as we negotiated a narrow street to reach Agroturismo La Gayría. 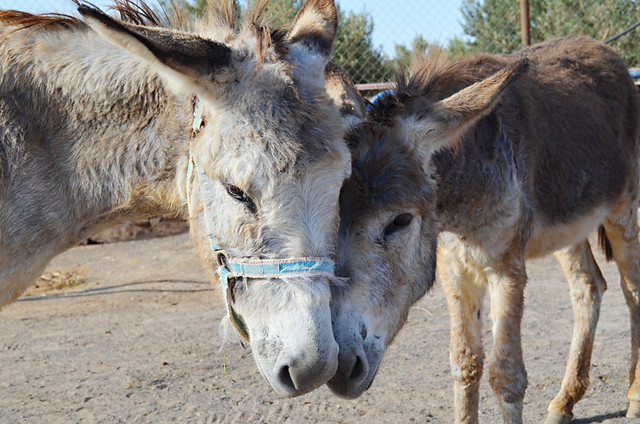 At La Gayría the penny dropped there was far more to Fuerteventura than I’d expected. Plastic water bottles dangled below olive trees; bougainvillea tumbled over wooden walkways around typically Canario stone farm buildings; dusty donkeys put on cute poses; cats stretched contentedly, hens clucked impatiently and agricultural implements decorated a courtyard where hammocks swung gently and tauntingly in the breeze. It was totally and authentically Canario; invitingly casual and not in the slightest bit manufactured. It looked lived in and homely. 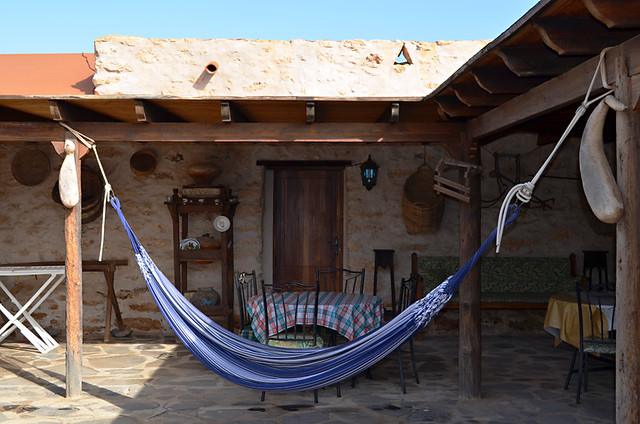 La Gayría makes their own wines, liqueurs and olive oil (cottage industry scale) and we got to sample each. The wine and liqueur were quaffed in a cool little shed filled with label-less bottles of all sorts of concoctions whereas the olive oil was enjoyed in the sunny yard, with more wine. It was a simple a tasting as I’ve experienced – a basket of bread, a plate of freshly picked tomatoes sprinkled with oregano and a plate of olive oil and rock salt laid out on a battered table. All local ingredients that added up to a simple but delicious revelation and a real taste of Fuerteventura in more ways than one. It was such an enjoyable moment I shared a photo on facebook which led to a chain of events that would bring us back to the island to explore it in more depth. 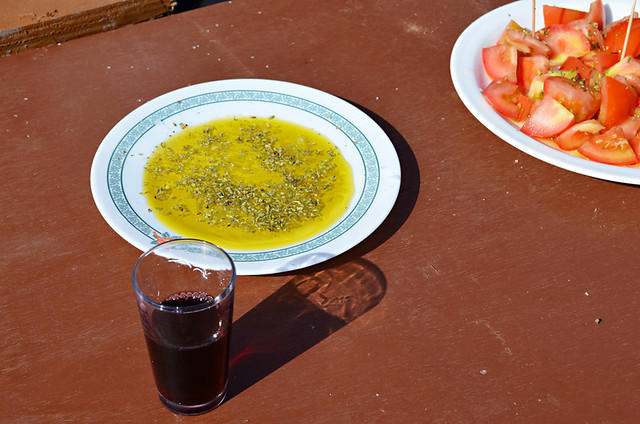 From that moment I stopped judging and just started enjoying. We paused in Pàjara where a donkey worked a well to the delight of local schoolchildren who distracted it from its job by offering it crisps as it passed on a never decreasing circle. At a viewpoint over Vega de Rio Palmas, Barbary squirrels showed no regard for authority by ignoring signs saying they shouldn’t be fed, and putting on a cheeky display that distracted from the impressive views. Historic Betancuria lived up to its pretty village promise whilst at La Villa goat farm just outside the town, we tasted a selection of the island’s deservedly renowned cheese as well as some goats’ milk liqueur. We bought some of the cheese but left the liqueur. 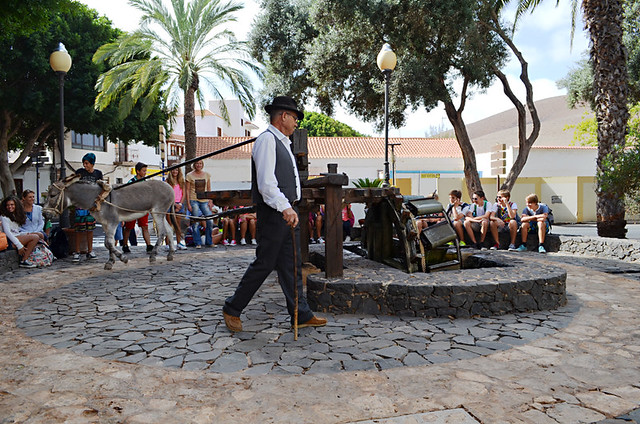 And so it went on. More pretty towns; lunch in an off the beaten track place outside Antigua (we know it was off the beaten track as we stumbled across it again, accidentally, months later; an aloe vera factory (yes, we had a drink of that as well) and finally the white mountains at Las Salinas salt pans before it was time to head for home. 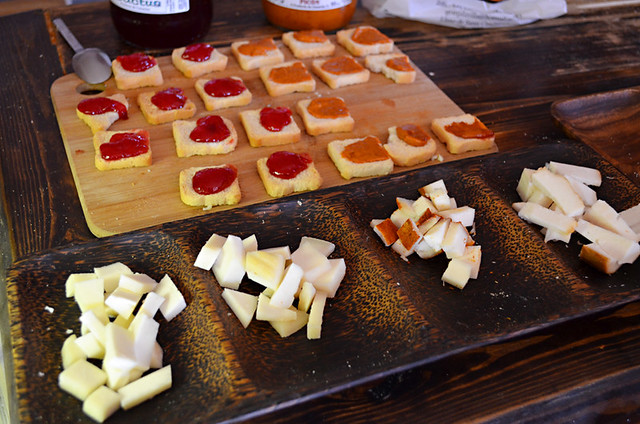 Yes, it was an excursion and there was a lot packed in to the day. But I felt we had plenty of time in the places we wanted to spend time and it was an appetiser for the island. An appetiser and an introduction to Fuerteventura which made us ravenous to experience a lot more of the island.