Memories of Hallstatt in Austria’s Salzkammergut region float around in my head refusing to settle on any particular spot.

Sometimes this UNESCO World Heritage Site, which made its fortune from mining salt for centuries, fleetingly touches down in the part of my brain which includes Carcassonne and Dubrovnik – places which are unarguably fascinating and lovely to look at but which lost something after having sold at least part of their souls to the gods (devils) of mass tourism. 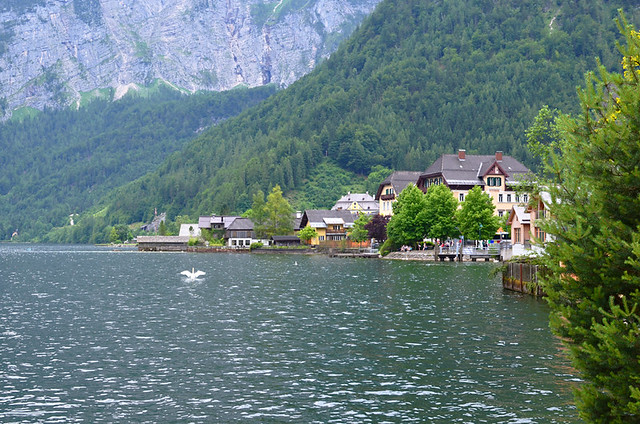 At other times it hovers near another travel file spot, one that is vaguely miscellaneous so that it might include a destination which didn’t quite win its way into my heart but which might fall under the heading ‘deserves another look’.

My undecided stance might have something to do with the circumstances of our visit. We stepped from people-free paths into a village which has become a firm favourite for coach excursions.

A Halstatt Appetiser #1
On our way to the craggy and icy heights of the Dachstein Mountains we stopped beside a row of quaint, wooden huts on the banks of glassy Lake Hallstatt. A short distance away, preening on the edge of the lake and looking every inch the delectable village which guidebooks promised, was Hallstatt itself – a juicy prospect to be visited a couple of days further down the line. 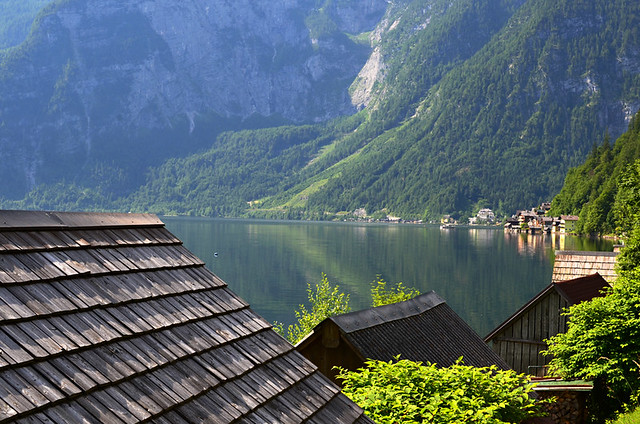 A Halstatt Appetiser #2
Looking down from Dachstein’s lofty summits Hallstatt looked even more perfect, soft and serene against the sheer cliffs which make the village appear as though it’s doing a balancing act, teetering on the edge of the lake.

The Real Thing
An overpriced car park didn’t get our initial introduction to Hallstatt off to a good start. There was quite a bit of grumpy ‘tourist trap’ comments from me before I was thawed by narrow streets lined by attractive houses with wooden-panelled walls and wooden roof tiles. They looked as though they wouldn’t stand up to too much huffing and puffing from a determined wolf with a decent pair of lungs. 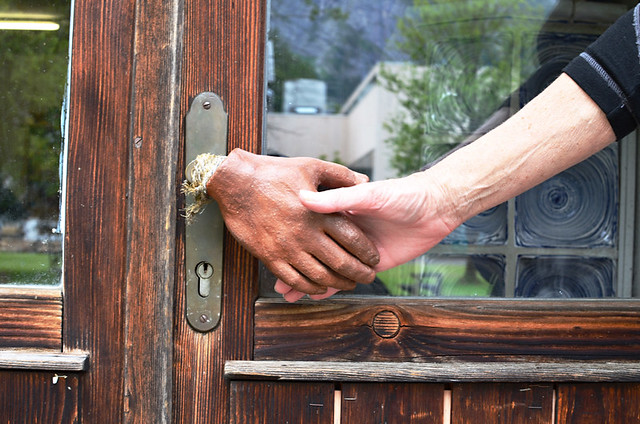 Arty Hallstatt
By the time we passed a technicolour zebra and the creepiest shop door handle ever, the quirkiness of Hallstatt’s outskirts had me deciding the town might be more than just a pretty face.

Kitsch Hallstatt
When we reached the main street running parallel to the lake through Hallstatt it was evident that for every ‘ooh, that’s interesting’ shop display, there was a kitsch equivalent aimed at a less discerning tourist market. This yin and yang theme had spread to the lake where real swans shared water space with boats in the shape of swans. The boats floated, but any semblance of good taste had sunk. 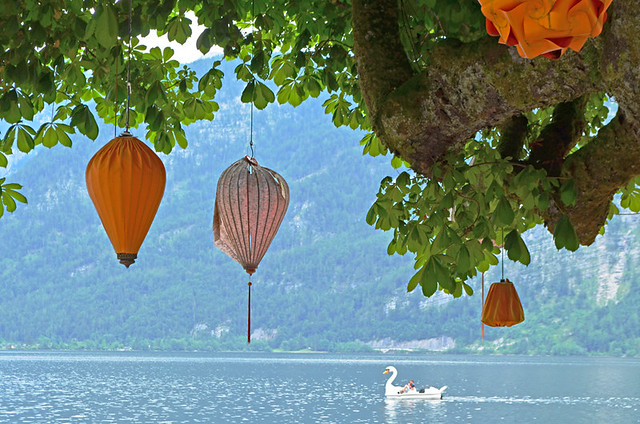 Beautiful Hallstatt
Boat-sized swans aside, lakeside Hallstatt close up is as eye-catching as it appears from a distance. Even on a greyish day, it was easy to see why German naturalist Alexander von Humboldt called it the “… loveliest lake village in the world.” 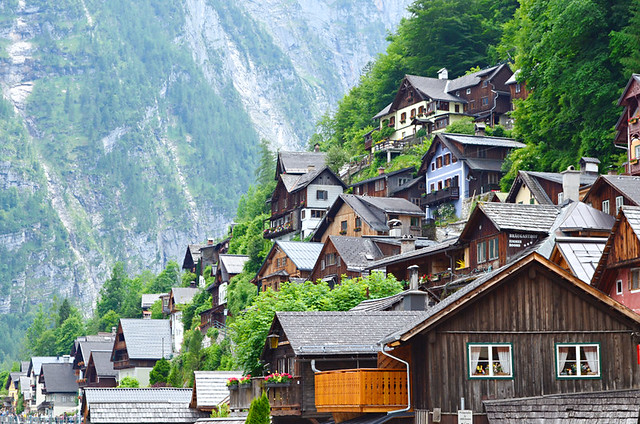 The Village Square
Equally pretty is the heart of the village, the market square with its centrepiece statue of the Holy Trinity. Like village squares everywhere, it’s bordered by café’s, shops and restaurants. The square was, like the rest of Hallstatt’s centre, bustling with hordes of excursionists who’d been unloaded from their coaches just as we’d reached the main part of the village. The visitors sharing the picturesque streets with us covered many nationalities, the overwhelming numbers being Asian. We’d been walking across Austria for days. Outside the hotels we stayed in we’d hardly encountered anyone who wasn’t Austrian. Half the time we didn’t encounter anyone at all. Suddenly we were in a village whose streets were full of Asian tourists. It was simply a surreal cultural shift.
It happens sometimes. Tranquil pretty town, tranquil pretty town, WHOOSH – absolutely jam-packed with tourists pretty town. 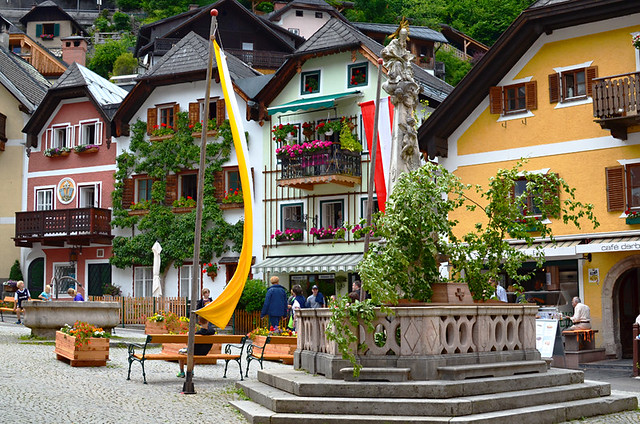 The Photo Point
When towns/cities/villages get on the excursion radar they can occasionally lose something. The sheer volume of visitors descending at any one time on a location can change its personality. To be fair, Hallstatt wasn’t in the same league as some other locations which we couldn’t get out of fast enough despite their beauty. But the vibe wasn’t the same as in the other Austrian towns and villages we’d visited. When an attraction includes the ‘photo point’ you know it’s in danger of crossing the line from charming historic village into theme park territory. Saying that, it is an excellent spot for taking photos of Hallstatt. 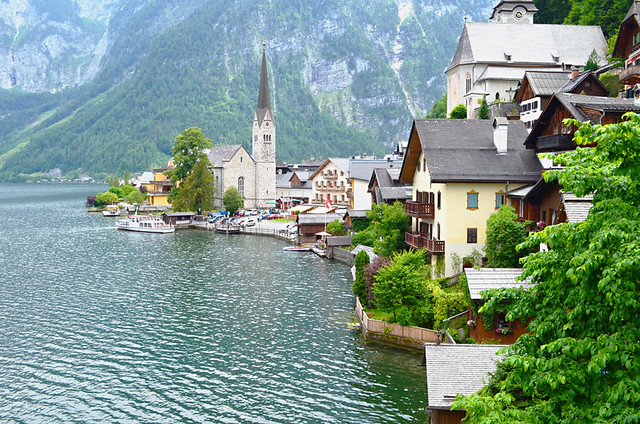 All things considered I was glad we visited Hallstatt and would return to explore more. It is an extraordinarily pretty village in a remarkably dramatic setting. I just have an aversion to places that are swamped by hordes of excursionists. That it’s hugely popular with Asian visitors adds to the surrealism of the place. It’s so popular a doppelgänger version of the village has been built in China.

Different ways to travel the Carretera Austral in Chile

Reading The Dictator’s Highway by Justin Walker transported me right back to the pot-holed, dusty main road which runs for 1240km from Puerto Montt to Villa O’Higgins, connecting the north of Chile with the remote, […]