There’s a scene in the BBC/Netflix detective series River where Stellan Skarsgard tears at his shirt collar after gasping ‘where are the trees? There are no trees… no oxygen, I can’t breathe’, or something along those lines at least. On a blisteringly hot July Saturday morning in Madrid I knew exactly how he felt.

38C in the shade and I couldn’t breathe. There was no air to be gulped in anywhere along the wide Gran Vía. I needed support from an additional set of lungs, the lungs of the city – Park de El Retiro. With around 15,000 trees set in 125 hectares, the park not only offered much needed fresh air, it also promised soothing shade. 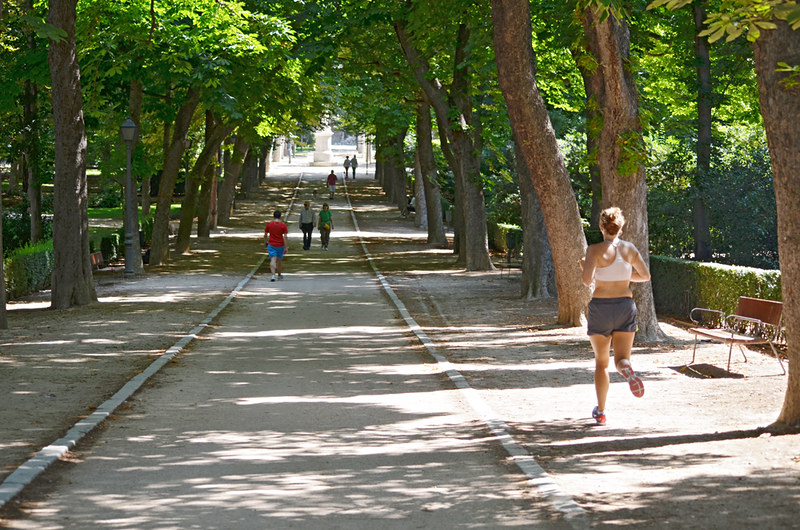 Landmarks such as the Plaza de Cibeles and the Puerta de Alcala were barely given a second glance as we practically power walked our way into the embrace of the green sanctuary and collapsed into chairs at a café beside the park’s north east entrance.

After a bitterly strong black coffee, freshly squeezed orange juice and a toasted, butter-less, croissant (breakfast entertainment provided by a middle aged couple who screamed in delight as they bounced around on an adults’ see-saw, and a group of photographers who seemed to be combining photography with tai chi) we were in a better prepared state for exploring what is a huge expanse of parkland. 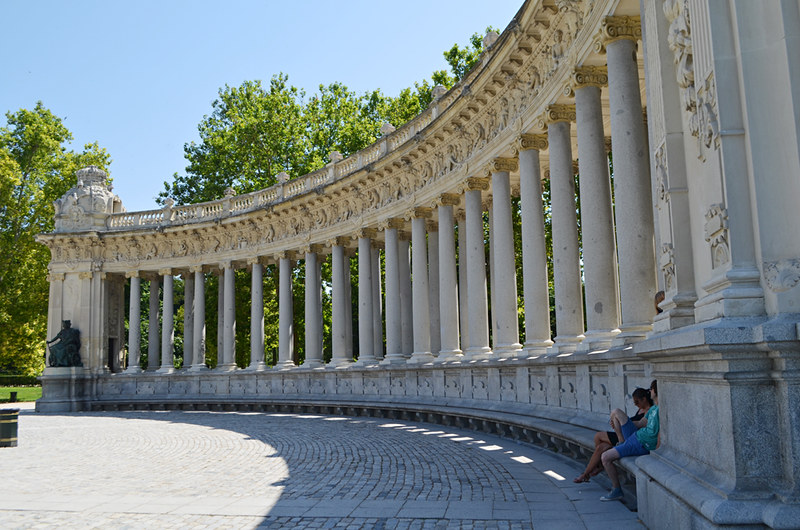 First stop had to be the Estanque Grand, the boating lake centrepiece of the park with a wide avenue on one side and the grandiose Monument to Alfonso XIII with its marble Aslams and Roman columns on the other. The temptation to take to the olive waters and lie back in a rowing boat was a strong one, but the actions of those already on the lake suggested it wasn’t as refreshing as it might at first appear. Many of the small boats hugged the far side of the lake, specifically a thin strip of shade at the far side of the lake. It was clearly extremely hot out there.

We decided to forego the watery sun trap and explore Retiro’s other attractions instead. 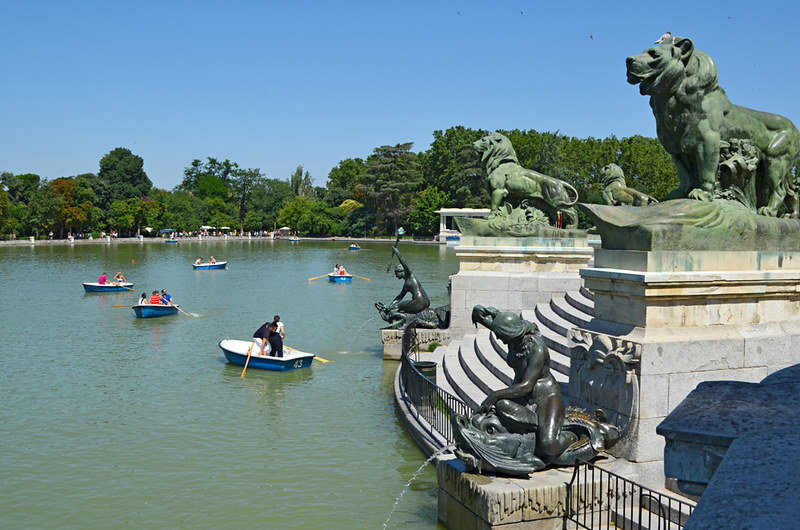 A map at the park’s entrance pointed out highlights to look out for, of which there were a lot. Unfortunately, there was a lack of maps thereafter. Unless you’ve got Jason Bourne abilities and can memorise a map in seconds, there’s no way you’re going to remember a route around what is basically an oversized maze. We started out with a plan but that soon turned into more of an anarchic meander – ‘ooh, there’s something interesting over there, let’s take a look’. 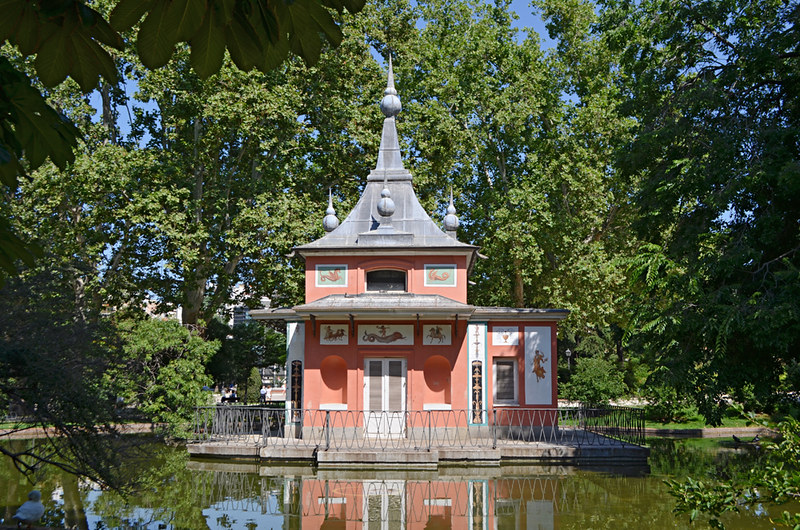 And in Park de El Retiro there is something of interest at just about every junction. Many are obvious but a lot of sculptures, monuments and quirks are half hidden amongst the 15,000 trees. Some attract the masses, others are virtually overlooked. Whilst the grandest have noble names (the Velázquez Palace, the Monument to the Republic of Cuba) others have quirkier monikers – the Casa de Vacas (basically a cow shed which is now home to art exhibitions; cool in more than one sense), the Mountain of the Cats and the Fisherman’s Cottage. Then there is the poignant, the Bosque del Recuerdo (Forest of Remembrance); 192 cypress and olive trees, one for each of the victims of the 2004 Madrid train bombings. 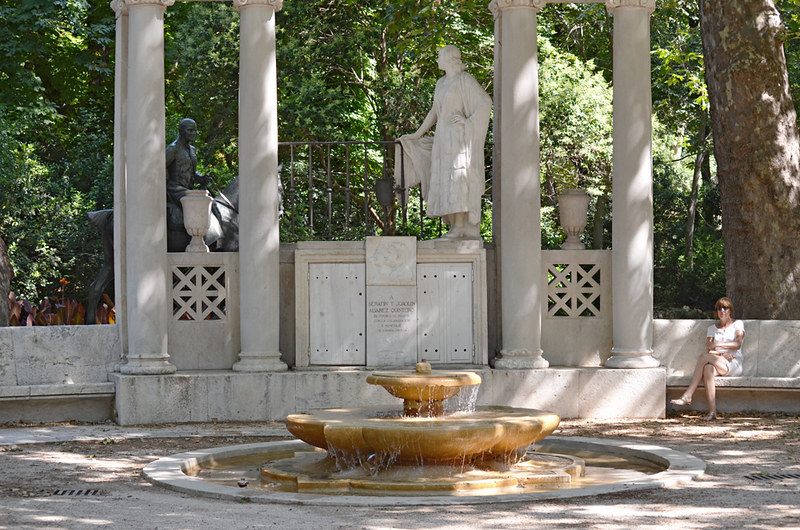 One of my favourite areas was around a monument dedicated to Serafin and Joaquin Alvarez Quintero; a Romeo and Juliet type scene in a shaded clearing. Despite the park being busy we had the romantic woodland setting all to ourselves.

However, the sparkling highlight was the Crystal Palace, a beautiful iron-framed greenhouse built in 1887 to house exotic plants from the Philippines. Its setting is just exquisite (overlooking a lake with fountain, grotto and waterfall, surrounded by oleander and cypress trees). There are no exotic plants inside these days, just an exhibition with contemporary works which looked as though they were wilting under the intense heat. We ventured, very briefly, into the glass oven for a closer look. 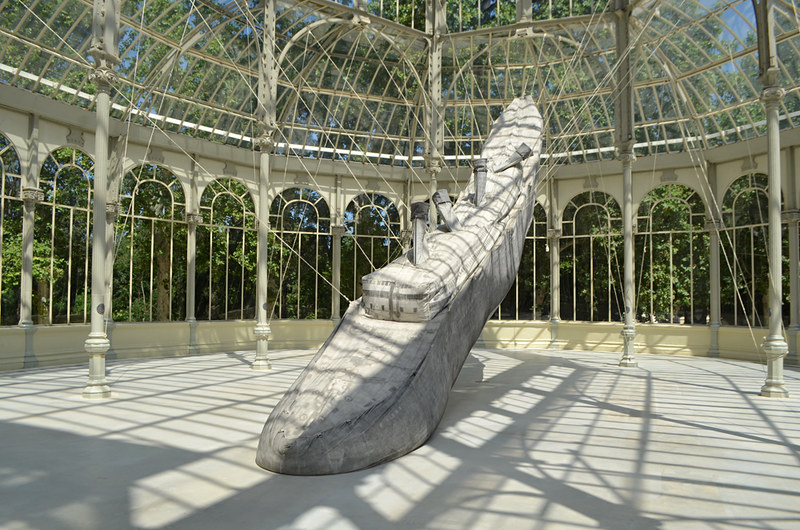 Thanks to the baking heat it was definitely one of those Karl Pilkington ‘Petra’ moments – better viewed from the other side of the lake, in the protective shade of trees. There we were able to relish the view whilst planning, in coolish comfort, the shortest route back to the safety of an air conditioned cerveceria near our hotel on Plaza Santa Ana. 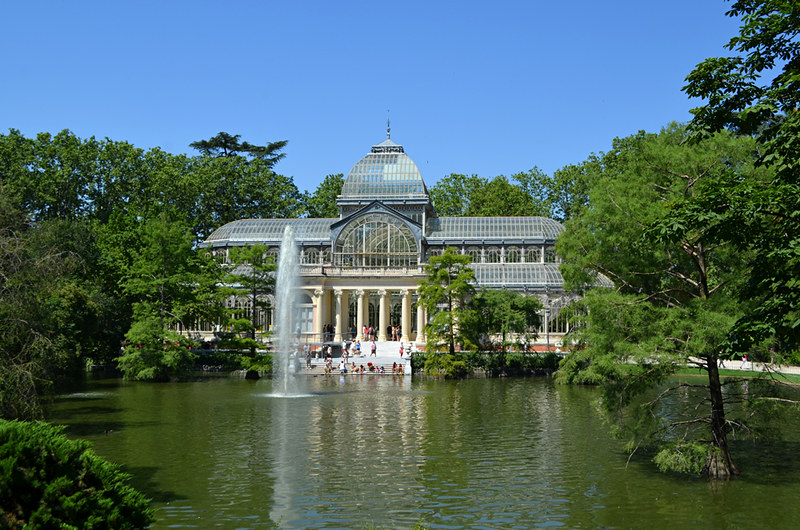 Park de El Retiro factfile: The park is open 6am to midnight between April and September and 6am till 10pm between October and March; entrance is free. The closest Metro stations are Retiro at the north entrance of the park and Atocha near the south end of Park de El Retiro.

Although Park de El Retiro is very close to the Prado Museum and Madrid’s art triangle, to try to visit them all in the same day would be to dilute the experience.

We live in Spain and had high expectations of finding food in Madrid that was different to the cuisine we’re used to. Plaza Mayor, beautiful though it was, didn’t come up with the goods. […]