We’ve written before about slow travel and how it’s more of a state of mind rather than a label applied to show off travel credentials.

We live on an island where people spend months over winter, many of them doing the same thing over and over again involving activities, if you can call them that, which don’t require a lot of interaction with the local population or even the inanimate surroundings – i.e. the countryside.

Using time as a measure to gauge slow travel irritates me. It is another tool occasionally used to illustrate how much of a true traveller someone is as opposed to those ‘poor’ people who have to work and can only travel for short periods during the year. It’s a way of misguided credential flashing, of saying ‘we’re better than you…’ which, of course, is tosh.

The three days chronicled below were actually work. They were also pleasure – exhilarating, tiring, educational and loads of fun. They were three days of slow travel. 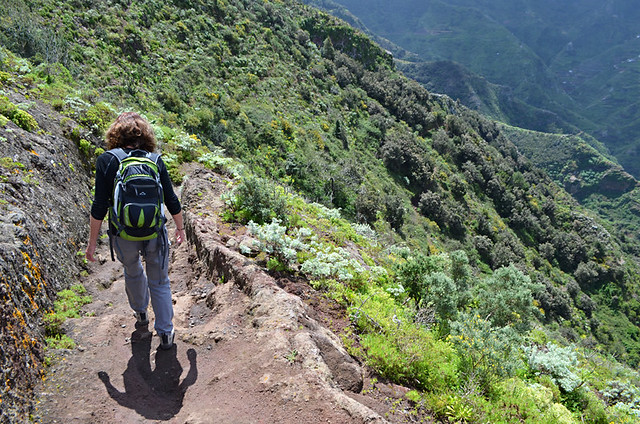 Day 1: To the Cave Village
We wanted to introduce a visiting friend to our favourite area for walking. It’s a landscape of steep ravines where a few hardy islanders still work the land, toiling away on narrow terraces that cling to the sides of mountains. Our route took us from a relatively busy walkers’ meeting point. Before we set off, we asked a ranger for advice about the state of the paths (there had been monsoon like rainfall the previous night) and spoke to the owner of a surprisingly jazzy café, given the remote rural surroundings, about some of his local produce. There was a type of honey we hadn’t seen before. He showed us a picture of the plant but it still didn’t help with identification.
We passed hardly another soul as we squelched our way through a damp, dank, slippy and atmospherically misty ancient forest before emerging on a ridge where the views opened up to the coast and revealed the sharp scars in the earth that kept the area so free of settlers.
The path passed a couple of small cottages with a motley crew of cats, dogs, chickens and some sort of creature that couldn’t seem to decide whether it was a goat or a sheep. 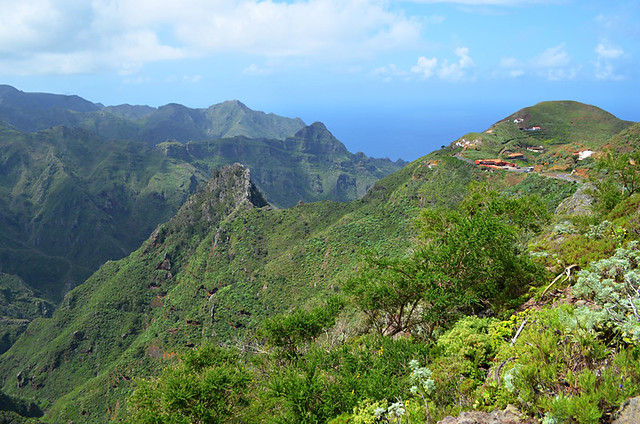 The halfway point of our route was at a troglodyte hamlet where there was a restaurant partly set in a cave. It’s an odd place that’s popular with city dwellers and hikers – a glaring contrast of fashion styles. The dish the cave restaurant is known for pre-dates, in a way, the conquest of the island by the Spanish. For a couple of Euros we dipped aniseed bread into a thick gooey substance flavoured by stock – it was wonderful.

Day 2: Wind, Snow, Rain & a Change of Plans
The plan was a long walk through a pine forest to a volcanic crater. It was thwarted from the start by weather that couldn’t make up its mind what it was doing. Torrential rain and thick fog slowed our journey and we shifted pans to deal with what the weather threw at us. As we drove higher the rain turned to snow and we ended up in a small queue of traffic as the snow around our Fiat Punto got thicker and thicker.
A Spanish women came towards us waving her hands. ‘No es possible, es cerrado.’ 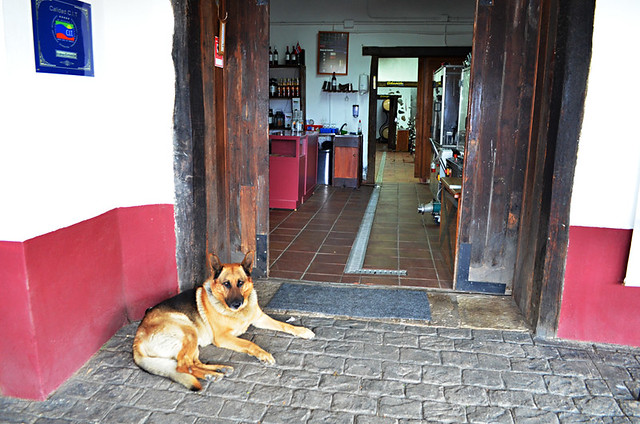 A small community gathered, made up of some Spanish speaking locals, us, and a trio of Australian hipsters who viewed the whole thing as a fun adventure, which it was as long as we didn’t get stuck in the snow. Alternative plans were hatched, based on info the woman had from a friend on the non-blizzardy end of the road, and off we went on our separate ways.

We eventually met up with our visiting friend two hours later than planned. Instead of our long walk, we agreed an alternative as we dried out in a cosy little café with a display of homemade tarts and where the owner teased our friend when he asked what tea they had. 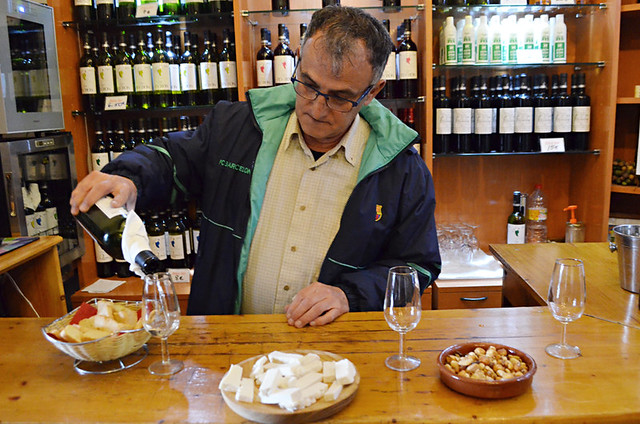 We decided on a shorter route and headed off through a landscape of low twisted vines, the highest vineyards in Europe, and potato fields as the clouds parted and the sun appeared. It was easy walking as we strolled country lanes to reach a small, sleepy bodega where we were treated to a tour and a wine tasting involving five or six glasses (I lost count a bit) of reds, whites and the darkest rosé I’ve seen. As we already had sandwiches prepared for our long walk, the bodega owner said we could eat them at a bench in his courtyard. He even plonked a bottle of wine on the table beside us.

It was 3pm. From that point on slow travel got even slower. 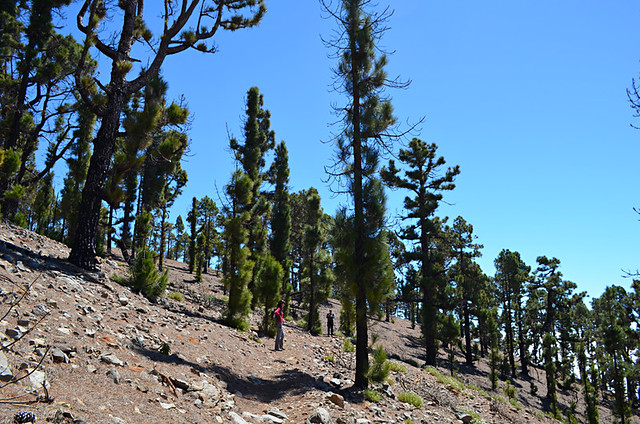 Day 3: Pines and Volcanoes
The big walk, nearly twenty kilometres ascending over one thousand metres. Just us and a few birds as we stepped from our hotel and into the forest to climb through pines and past hidden ravines whose slopes were softened by a carpet of pine needles. As we walked higher the pines thinned and were joined by low alpine-esque flowers. The first person we met was a forest ranger at a picnic zone, a quiet place midweek. We asked if the water in the fountains was ‘agua potable’ (safe for drinking). It was but not treated so we got a sort of ‘you can drink it, but don’t blame me if you get the runs’ response.
It was a perfect position to eat some filled baguettes before continuing onwards and upwards to a ridge where an epic volcanic landscape stayed hidden till the last possible moment.  As we reached the high point of our route,  it revealed itself. It was a glorious sight to blast away any tiredness in the limbs, even though we still had another couple of hours of climbing, descending, climbing, descending ahead. 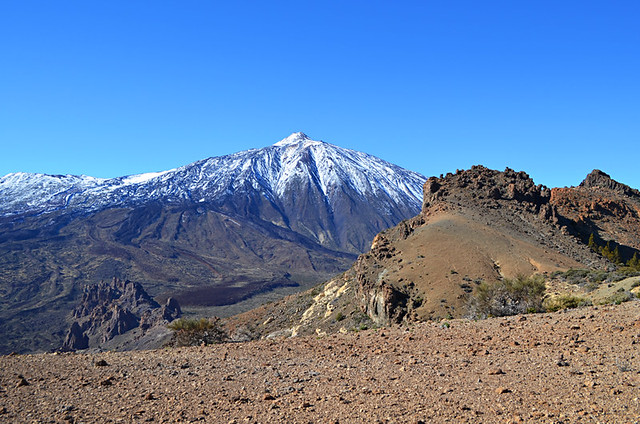 With the views we had accompanying us stopping us every few minutes, it truly was slow travel.

I deliberately haven’t mentioned specific places for a reason; the location could be anywhere. This is more about illustrating the fact that slow travel isn’t the exclusive domain of those who take a lot of time out to travel.

Slow travel is within the grasp of anyone who wants to reach out and passionately embrace it… even if only for a few hours.