In the last year we’ve visited Corsica, Bavaria, various Canary Islands, mainland Spain, Chile and Crete. Yet this trip to Portugal is unlike any of them. 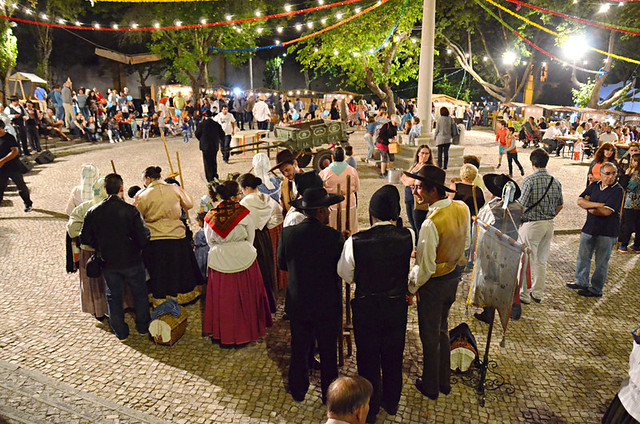 Maybe it’s the language; we’re struggling with it. Locals either talk excellent English when our attempts stutter or fail, or try their best to communicate in English, still surpassing our pathetic attempts at Portuguese. But this shouldn’t be new; we blunder our way about in the dark in language terms in various countries. For some reason our inability to communicate in Portuguese is more frustrating than in other places where we’ve struggled to understand or be understood. The odd thing is we can recognise many of the words when they’re written down as they look similar enough to Spanish for us to be able to join the dots. But when we attempt to speak them, we’re met with blank stares. Maybe it’s that familiarity, virtually useless so far, which is at the root of the frustration. 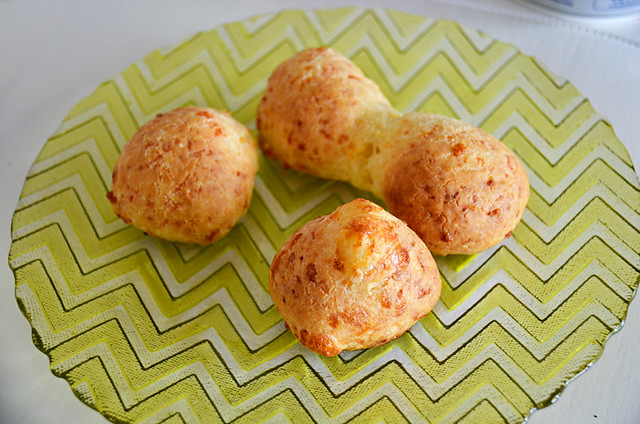 Our neighbour is Brazilian. The other day he brought a tray of bread to our Airbnb cottage, indicating they needed to be baked before we ate them. They were delicious little cheesy rolls. I wanted to tell him how much I enjoyed them so used Google translate to come up with “Gostamos muito do pão, obrigado” trying to make it sound Portuguese by adding an H after every S. Who knows if Gene understood, but he gave me the thumbs up. This thumbs up has become our way of communicating. 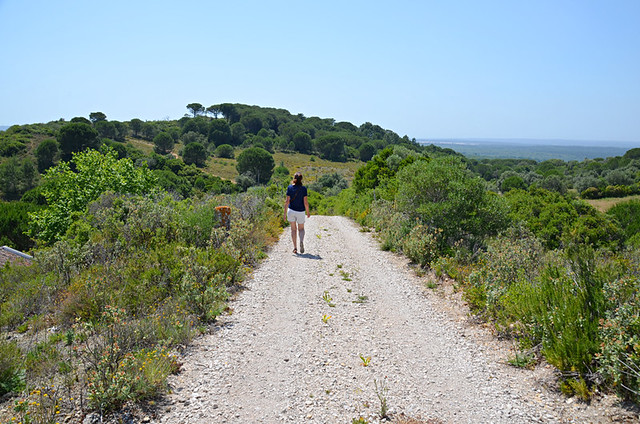 Staying at a cottage in a lovely sprawling quinta (farm) on a hill about a kilometre and a half from the village of Azeitao means we’ve cooked more than we normally would on a trip, using ingredients from a couple of nearby supermarkets. These ingredients, like the language, are both familiar and yet different. We cook our favourite recipes, but the results have slightly different flavours. Meals are paired with Portuguese red wines we know nothing about. Mainly produced in the surrounding slopes, they have invariably been silky smooth with fruity vanilla flavours and have slipped down our throats far too easily. 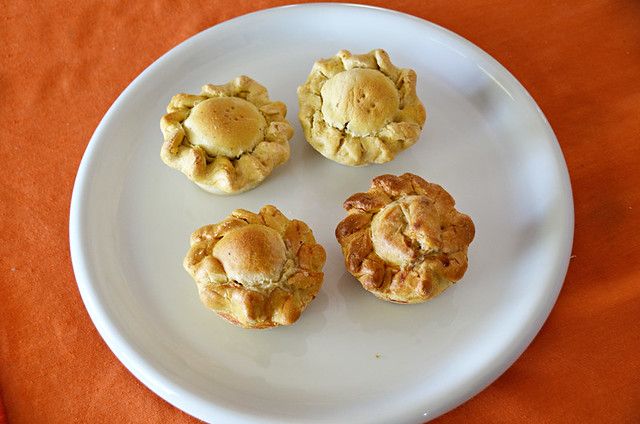 Each morning we’re visited by Caracol and Cookie, the two bear-like dogs belonging to the quinta’s amiable and helpful owners. Caracol and Cookie turn up at the door for a hug and a head scratch in the morning, afternoon and early evening when we crack a Portuguese IPA and sit in the sun marvelling at the misty plain stretching between us, the Tagus and Lisbon. Over a few days we’ve grown very fond of the bear-dogs and look forward to hearing Caracol’s ‘get up I’m waiting for a pat’ bark. 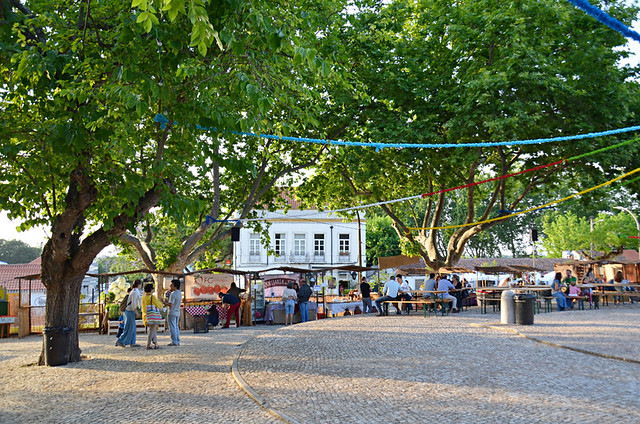 At the weekend we strolled into the village along unsurfaced country lanes to spend the afternoon watching locals at play at a small gastronomic fair in the main square whilst we worked our way around the wine and food stalls lining the praça. We started with bifanas, warm pork fillets in proper rolls; rolls like the ones they make in Bute, the Scottish island where I grew up. After that we had mini chicken pies, shrimp empadas, and sweet pastries whose fillings we couldn’t identify. Watching locals swarm one stall, we followed suit and, like everyone else, bought a slab of dense fig cake. 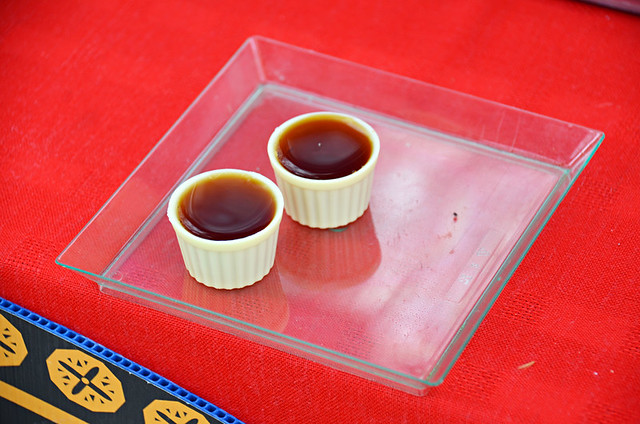 At one point a woman passed holding a tray of something in white chocolate shot glasses. Andy made a passing commented about how good they looked to which the woman smiled and replied in English “they are delicious, you should try some.”
So we did – drinking a cherry liqueur called ginja then eating the white chocolate glass it was served in before buying a castanha (chestnut) flavoured bottle of the stuff. 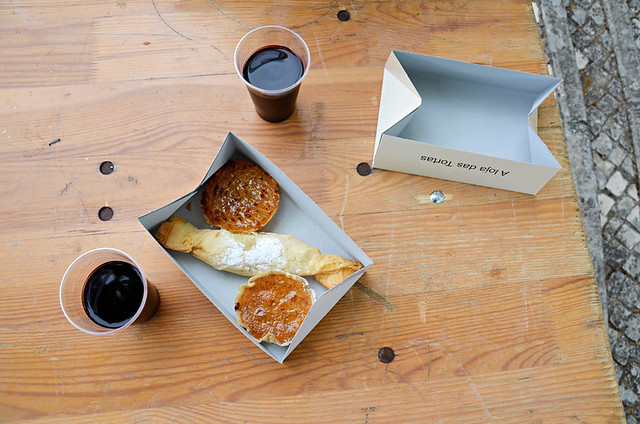 The afternoon slipped past as we ate, drank and listened to music which switched easily from saudade to what was basically hits from the 80s and 90s; sounds which unlocked waves of warm nostalgic memories. Each visit to a different stall represented a challenge and communication was occasionally stuttering, but to a person everyone was friendly, incredibly so. We were made to feel very, very welcome. 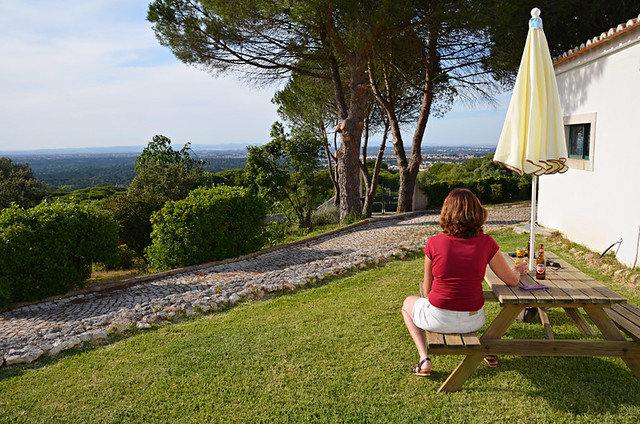 Despite the annoying awkwardness regarding the language, our personalities have retreated deeply into their linguistically-challenged shells, this little village south of Lisbon feels comfortable… very comfortable. It feels different. It feels like a nice fit.

We move on in a few days. I’ll be extremely sorry to leave.